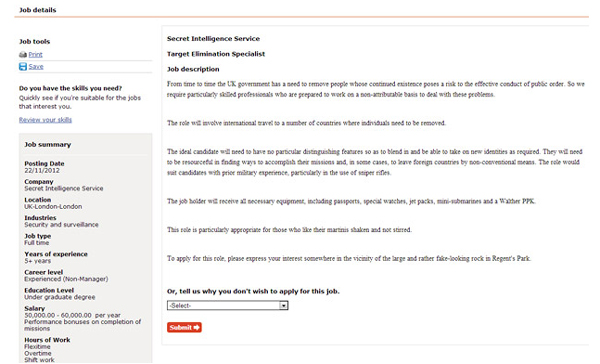 Fancy trying your luck as a real life Bond? Will you be putting this weatherproof umbrella at the top of your Christmas list? Let us know via Facebook or Twitter.

If you are one of the millions of cinema-goers who have watched the latest big screen Bond adventure, Skyfall, and were consequently inspired to seek out a licence to kill, then you could be in luck!
Last week a fake job advert appeared on Direct Gov, the website used for government recruitment, calling for “particularly skilled professionals” describing a key element of the role as being, “removing people whose continued existence poses a risk to the effective conduct of public order.”
The job reference code was given as “007” and it appeared to have been posted by MI6, who immediately confirmed that it was not an official advert and condemned the stunt.
This smells suspiciously like a PR stunt to me and not just the work of a lone joker…
http://www.guardian.co.uk/uk/2012/nov/23/mi6-james-bond-advert

Anyone living in Scotland will be aware of an umbrella’s numerous limitations. It is a well known fact, north of the border, that if rain is anything but rigidly vertical and unaccompanied by wind, it will immediately defeat your umbrella and you will get soaked. The truth is, conventional umbrellas only really work in pathetic rain situations, and unfortunately rain is Scotland is rarely, if ever, pathetic. It is for this reason that the ‘Rain Shield’ should be of such interest to us near-highland-dwellers. Designed to combat torrential downpours, the shield is formed using a singular steel wire and cam fold up into a small 7 inch diameter plate. For more on this invention click the link below to watch the video.
http://mashable.com/2012/11/25/umbrella-rain-shield/​

I’ll get this out the way by saying this one is childish but very entertaining with some of the tightest amateur editing skills I’ve seen, so much so that part of me refuses to believe it isn’t real.
In the following video, Neil Buchanan, famous for teaching kids how to make a mess in Art Attack, shows us how to skilfully draw the male anatomy.
I think I can speak for mostly everyone here and say school jotters, desks, whiteboards, computer screens and whatever else could be vandalised, was plagued with depictions of the dangly bits.
It’s maybe a good thing this wasn’t around at the time of my youth although my school jotters would have been unbelievable.
http://www.youtube.com/watch?v=727zX-wh_J0

From art to a very different kind of creativity in the form of self surgery.
No freakish images but the written content is maybe enough for a squeamish audience in this list of eight people who survived after performing surgery on themselves.
Completely mental and usually done under conditions of complete desperation. Take for example Johannes Lethaeus who was plagued with the discomfort of having a kidney stone the size of a hen’s egg. After suffering a period of intense agony with the traditional methods not working, he sliced himself open, reached in and grabbed the very stone himself.
Oooooft. If that’s got you morbidly curious, read on for more death defying surgical stunts.
http://io9.com/5962062/eight-people-who-survived-by-performing-surgery-on-themselves

Well it’s that time of year again when our TVs are full of the joys of Christmas. John Lewis, M&S and Sainsbury’s normally come up with enjoyable creatives that leave us talking about them for Christmases to come. This year is certainly no different with John Lewis taking the top spot in Mumsnet’s Christmas study. To be honest who wouldn’t love a snowman love story?  It brings a tear to my eye every time!
http://www.brandrepublic.com/news/1161321/top-10-christmas-ads-2012-voted-mums/