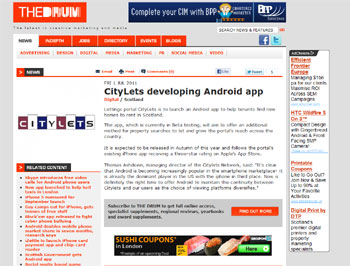 Citylets featured in The Drum magazine after revealing that it was developing an android app to help tenants across Scotland search for properties to let through their android mobile phones.

The plans come after Citylets’ existing app for the iphone received a three-star rating through the apple store – making it the country’s highest-rated property app. Managing director Thomas Ashdown said that, as android was becoming the biggest player in the mobile phone market overseas, it was imperative that companies caught up with the times and started developing apps for the operating system.

The full article can be viewed on The Drum’s website, and was the result of a sustained PR in Scotland campaign maintained by the Holyrood PR.