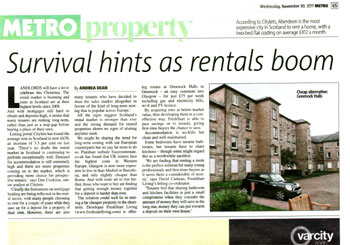 Scotland’s leading lettings portal has been featured in a prestigious daily newspaper following the publication of its latest rental report statistics.

Citylets has received prominent coverage in the weekly property page in the Metro newspaper – one of the country’s most widely-read daily titles – after it unveiled it’s latest quarterly data report showing the current state of the country’s letting sector.

The latest report, which covered the period between July to September 2011, highlighted how rents were continuing to rise across Scotland as the “Generation Rent” attitude among tenants prevailed over the desire to purchase a home. Senior analyst Dan Cookson said that the stats showed that long-term renting was now a lifestyle choice in Scotland and added that the upward trend for rents showed no sign of slowing down.

The Metro coverage is the latest high profile media exposure that Citylets has received for the Q3 datareport – and was secured by the continued public relations in Scotland expertise of Edinburgh PR agency Holyrood PR.