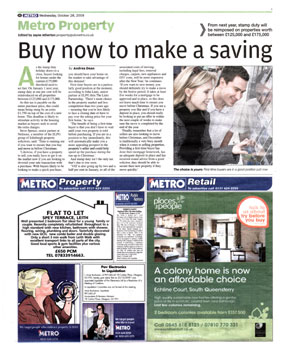 Memebers of the Edinburgh and Lothians Property Group have been celebrating after scooping another piece of high profile coverage in the Scottish press.

The ELPG – which consists of five of Edinburgh’s leading property solicitors – received the boost after being featured in the property section of the Metro newspaper that focussed on advice for first-time buyers looking to purchase homes in the current economic climate.

The newspaper quoted John Lints, senior partner at the Lints Partnership, who said that first-time purchasers were running out of time if they wanted to get the best deal before Christmas. He added that, as the Government is re-introducing Stamp Duty on properties priced between £125,000 and £175,000 in the New Year, would-be buyers should act now in order to save money on the tax.