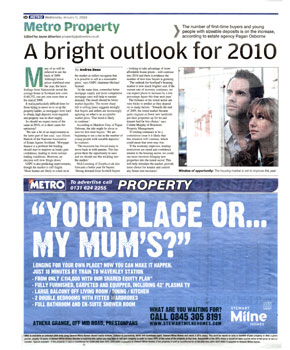 Edinburgh’s leading lettings firm has been celebrating after being featured prominently in one of the country’s most read daily newspapers.

Braemore Property Management was featured in The Metro newspaper, which ran an article looking at the future of the Scottish lettings sector in 2010.

The paper quoted Braemore director Colette Murphy in the piece, who said that the country’s rental market was likely to be unpredictable over the next 12 months. She said that the market would be affected by the availability of money being offered by major lenders – with more properties likely to be put up for rent if lending restrictions are eased.

The full coverage appeared in the Metro and was the result of a sustained media strategy implemented by Scottish public relations experts Holyrood PR PR in Edinburgh.