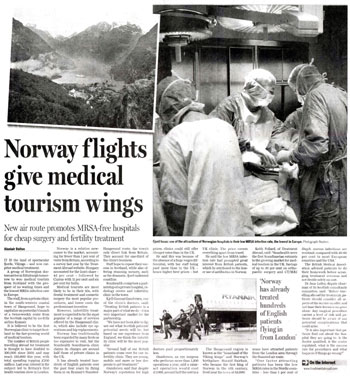 It’s been a high-profile year for Norway after winning the Eurovision Song Contest and now there’s cheap flights between Edinburgh and Haugesund, Norway which has paved the way for a medical tourism company to start offering a number of treatments in the picturesque Norwegian outlet.

To promote their services, the medical tourism doctors turned to the Edinburgh PR team at Holyrood PR to arrange coverage of their services on offer but also to meet and greet with the press and local influentials.

Using a well connected team for PR in Edinburgh appears to have paid off with glowing coverage across the top tier titles, including Scotland on Sunday and Mail on Sunday.

The opening of the service comes on the back of a new direct, low-cost, 90-minute Ryanair flight from Edinburgh to Haugesund launches on July 4.

The region of Haugesund, on the south west coast of Norway, is known as ‘Homeland of the Viking Kings’ and is credited as being the birthplace of Norway and the gateway to the country’s stunning fjords.

More important than ever to look after ourselves, says walking charity

Comments Off on More important than ever to look after ourselves, says walking charity

Comments Off on Accountancy sector must tackle pre-existing headwinds