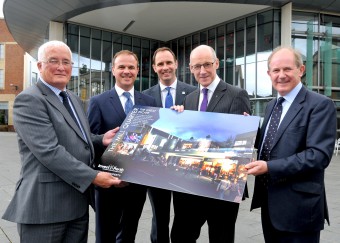 , the inward investment campaign by Perth and Kinross Council recently celebrated its part in securing a groundbreaking boost for the fair city.

With a bit of help from our award-winning PR agency in Scotland we were able to land a wealth of media coverage, landing in the big publications and ensuring online, print and television coverage.

By maximising the Perth City Region’s opportunities throughout the UK and globally, it aims to position Perth City Region as the most desirable place to live, work, invest and visit in Scotland.

Perth is the location of choice as it is strategically located in the centre of Scotland which benefits from a rapidly growing skilled workforce. In addition it has over £400 million worth of investment opportunities that have the potential to build and sustain the regional economy.  Any business plans pitched to the Perth region, benefit from rapid digital connectivity and fast track planning – approximately 80% of applications are decided within 8 weeks of them being proposed. 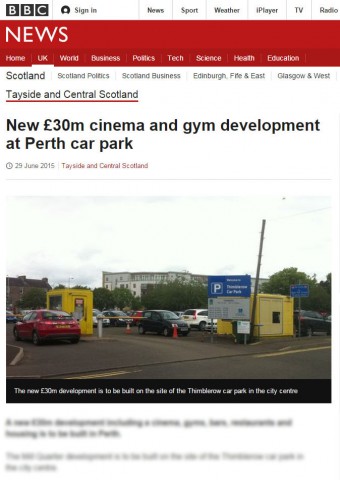 Invest In Perth’s most recent exploit is a £30 million development which is to be built in the centre of Perth City. The huge project has attracted a great deal of coverage in the media after securing the approval of the Scottish Cities Alliance which comprises seven of Scotland’s cities and the Scottish Government itself – marking it as the first project to do so.

Perth and Kinross Council have accorded Expresso Property the privilege of developing the site. Expresso are creative property developers specialising in the successful delivery of commercial and residential projects – the project will benefit from their expertise in these sectors. 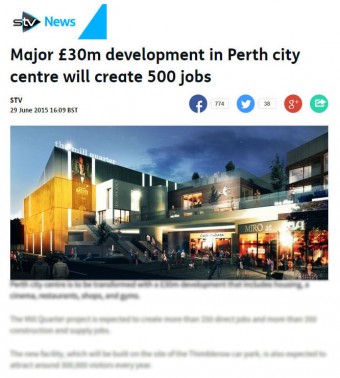 The multi-use development (which promises the community of Perth, bars and restaurants as well as retail, cinemas and accommodation) is a landmark construction. It will increase incentive to live, work and invest in the City centre, and expects to deliver on 150 jobs and attract 300,000 visitors every year, notes the Scotsman – these numbers are looking promising for the City of Perth.

Deputy First Minister John Swinney was present at the announcement at Perth Concert Hall, ensuring the unveiling of the new plans would be received by a wide audience. Media coverage of the new plans have been exposed in a numbe 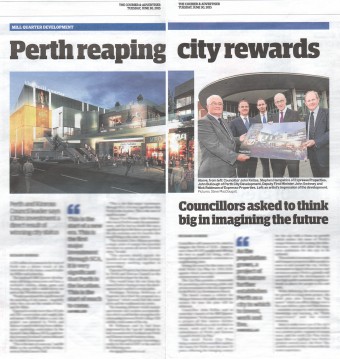 r of reputable publications including The Herald, The Scotsman,

The Metro, The Daily Business Group, in the Courier the feature spread across two pages, reaching over 50,000 reader and the BBC Online News. The BBC Online, alone, accounts for 40 million unique users. The features thus reached audiences at a regional and a national level throughout the United Kingdom.

Strong media coverage is crucial to Invest In Perth, as it manages a number of developments that are remarkable investment opportunities for businesses.

Your Business Can Benefit From Our Award Winning PR Services

Here at Holyrood PR, we would be delighted to help your business gain the media coverage it deserves. If you would like more information, get in touch with one of our team members on 0131 561 2239, or fill out the form below: