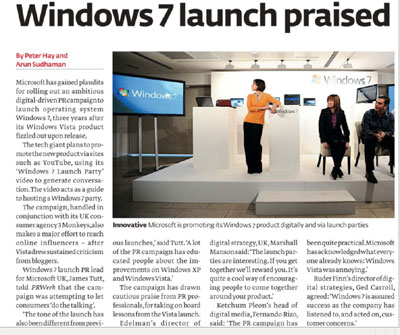 It’s not often these days that Microsoft seems to get any good PR.

So it’s nice to see our industry bible, PR Week, reporting how the computing giant has won plaudits for putting a digital PR rollout at the heart of its Windows 7 Launch.

The once unassailable computing giant created by Bill Gates has been somewhat eclipsed these days by the search engine-video colossus that is Google-YouTube and by the rise and rise of social networks like Facebook and Twitter. And don’t even mention the iPhone.

Everybody knows Microsoft was so wrapped up in its operating system monopoly that it never saw the rise of the web app. Then it picked the wrong fight by taking on Sony for a share of the game console market while Google made hay. Duh.

Since it seems unlikely its own search engine – Ping? Ding? Ker-ching? – is likely to challenge Google in any meanigful way, maybe Microsoft is now returning to what it was actually once good at: coming up with PC operating systems.

Vista was a huge damp squib. Now people seem to be getting excited again about Windows. Word has it that they’ve listened to customer gripes and acted on concerns raised.

Not only that. but part of the launch has included a video guide on how to organise a “Windows 7 Party”.

Windows can easily pull one over on arch rival Google in this area simply by ensuring as many people as possible are encourage to take part in its digital Rave.

As anyone who is STILL waiting for an inviation to Google Wave will tell you, the sense of building anticipation lasts only so long. Then you simply get fed up and move on to somehting else instead.