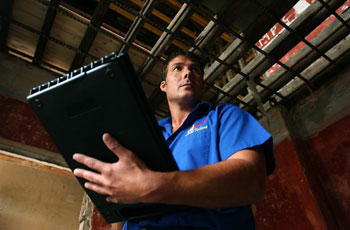 One of the UK’s most successful disaster recovery firms is on course for a record year, driven by growth in the Midlands.

FFDR, an all trades contractor specialising in salvaging flood and fire-ravaged properties, acquired a 50% stake in Leicester-based Maxim Property Services last year and it has rebranded as part of the FFDR group.

That has fuelled further growth with the firm – now in the top three insurance contractors in the UK – forecasting an £8 million turnover in the next year, up from the current £6m.

The 30 staff in Leicester have swelled the FFDR workforce to 130, with around 100 skilled trades people, backed up by 30 support and surveying staff. The firm also boasts a 70-strong fleet, with no vehicles more than three years old.

Ronnie Klos, managing director of FFDR, said: “The move into the east Midlands has been spectacularly successful for us and I want to thank the entire team for what they’ve achieved.

“We’ve now proved that FFDR is a company that can operate successfully anywhere in the UK and we are planning to open further offices in both Leeds and Newcastle.”

However the next phase of expansion will be a £300,000 investment in the Aberdeen area, creating 30 jobs with a new office in Stonehaven. Mr Klos says that will cement the firm’s dominance in his native Scotland.

The 42-year-old believes the key to FFDR’s success is the stability of his workforce – which has become even more important as the recession has decimated the construction sector.

FFDR has a history of attracting and retaining experienced tradesmen while also encouraging apprenticeships and training the next generation.

Mr Klos added: “Our staff are with us long-term and the turnover of staff  is negligible, certainly less than five per cent.

“Of those who have left seeking opportunities elsewhere, many of them soon come back and insist they won’t make the same mistake again because what we offer is job security, even in these uncertain times.”

PR in Scotland for FFDR expert

Another key to the firm’s stability is the long-term trust built up with major insurance and loss adjusting experts.

Mr Klos said: “The insurance sector has not been unaffected by the recession. While the amount of work has remained consistent, everyone is looking for better value and better customer service. We deliver on those counts and that is why we are growing.”

Founded in Lochgelly, Fife, in 1996 the company has enjoyed sustained growth. As well as focusing on providing experienced tradesmen, Mr Klos was quick to recognise the power of technology.

He developed the firm’s bespoke Claimsort software at the turn of the century, ensuring FFDR stole a march on rivals in terms of customer service. He was also quick to adopt sophisticated fleet management software to improve efficiency.

Earlier this year FFDR launched its revamped website, www.ffdr.co.uk and work will begin in 2010 on purpose-built new £750,000 HQ in Lochgelly.