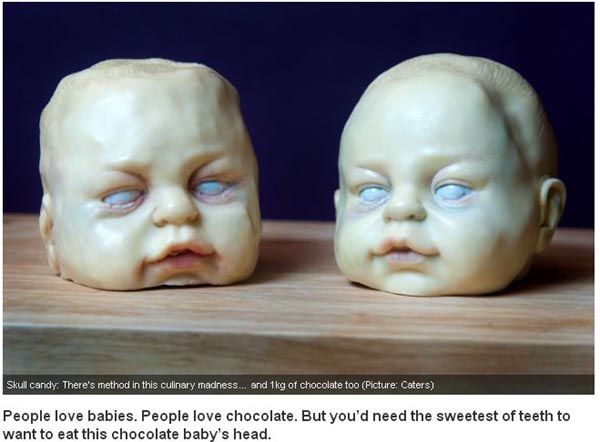 If Social Media is your thing then check out our ramblings on Facebook, Twitter, LinkedIn and Google +.

Following the Christmas festivities I for one have most likely consumed my own weight in chocolate, I’m sure most folk are feeling the same. For those of us with a sweet tooth that has led to packing on the pounds I may have stumbled across a peculiar cure. Annabel de Vetten was briefed to produce ‘something that would shock people’ and created the intended one-off life sized chocolate baby heads which are scarily realistic and equally shocking. The chocolate baby heads weigh nearly one kilogram each and contain 5,000 calories, I’ll certainly not be purchasing these at £35 a pop.
http://metro.co.uk/2013/01/06/chocolate-baby-heads-are-a-chocky-horror-show-3340755/

SINGALONG WITH THE SUN (Gaynor)

To release the depression of January the Sun has came up with a quirky advert featuring a girl leading a sing along. A part of its ‘get involved strap line the campaign the advert is designed to help promote its big smile giveaway, a range of promotional bargains which includes holidays for £9.50. Personally this advert makes me more depressed.
http://www.brandrepublic.com/news/1165405/the-sun-launches-sing-along-ad-campaign/

As a self pronounced cat lover and an avid Downton Abbey viewer, you could imagine my delight at discovering these drawings this morning. Artist Kim Parkhurst has had the ingenious idea to create a series of drawings showing the characters from the hit TV series as cats and dogs. Some of the resemblances are uncanny but my personal favourite has to be the Dowager Countess; her characters stern and sarcastic personality is definitely revealed through the eyes of a Sphynx cat. I have heard people saying it is possible to resemble your pets before but never understood it until now! These drawings have definitely brightened up my Monday morning…
http://www.buzzfeed.com/summeranne/downton-abbey-as-dogs-and-cats​

Any budding gardeners out there worrying about getting down and dirty in the garden for fear of not having the skills to make their green finger scheme work – take note, a vital tool for you could be on its way. A prototype for a not-yet-launched Flower Power smart gardening gadget, which allows users to get data in real time about how best to care for plants, flowers and your lawn, has been revealed. The device is shaped like a pair of shears and measures sunlight, humidity, temperature and fertiliser. For more click the link below.
http://mashable.com/2013/01/06/flower-power-parrot/​

An ingenious new advert by Fiat featuring a young mum rapping about the joys and perils of motherhood, had me in stitches when I viewed it over the festive period. I imagine the ad has struck a chord with mums across the globe too in this humorous rap about faking orgasms, eating leftover fish fingers and joining a book club as an excuse to drink wine.This latest YouTube sensation with already over 2million hits depicts this motherly gangsta rapper in her home singing about her daily life “I’m a school run taker, fairy cake baker, deal maker, orgasm faker, nit raker, rattle shaker, cheese grater, night-time waker. I’m a placater. Peacemaker.” Fiat have certainly taken it up a gear with this innovative ad that arrived on the back of focus groups set up to look at new ways to market the 500L Car to new families.
https://www.youtube.com/watch?v=eNVde5HPhYo​