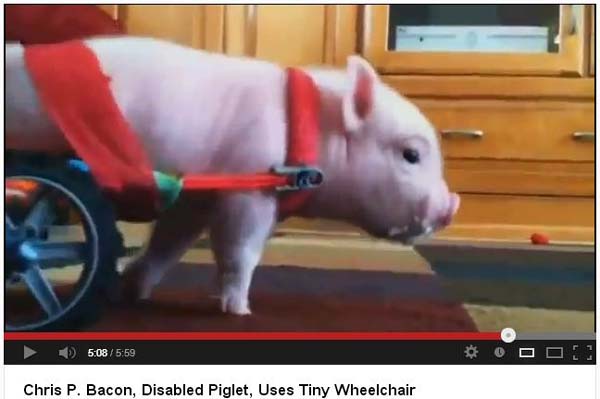 Enjoy our blog? Tell us what you think by tapping into our Facebook, Twitter, Google+ and LinkedIn accounts.

I was definitely in need of a cute animal fix this morning and the following certainly helped alleviate my Monday blues.
Meet Chris P. Bacon, a tiny piglet who was born without use of his hind legs who is able to walk again after being fitted with a wheelchair.
If this doesn’t warm your heart then there is something wrong with you!
Follow this little cutie on Twitter @ChrisPBaconPig
http://www.youtube.com/watch?v=cjF_2Gpkpm4

I know the whole photobombing thing has be done to death, but the most recent Grammy instance is probably (perhaps tenuously to some) worth a mention. The fact that it is Kelly Clarkson photobombing Portia de Rossi and Ellen DeGeneres helps. To view this quite tame yet amusing-becaue-its-celebrities photo, click the link below. P.s. I wonder what Prtia and Ellen will have to say…
http://mashable.com/2013/02/10/kelly-clarkson-photobomb-grammys/

AGE OF THE CREATIVE CV (Aoibhínn)

The current job market is certainly a tricky one, looking through job postings and adverts is the easy part. Getting the attention of perspective employers is a whole different ball game. Seemingly the content of a person’s CV is no longer relevant, particularly within the creative industries. If you’re looking for inspiration check out this selection of “Incredibly Creative Resumes”, from Coffee bag CV’s to my personal favourite Vintage Resume Package.
http://www.demilked.com/creative-resumes/

As much of a part of British culture as sausage and mash, turkey at Christmas and Coronation Street, The Sun’s page three girls may be no longer if what Rupert Murdoch has hinted at on Twitter is to be believed.
After receiving a tweet stating that page three was “so last century” he replied saying, “you may be right, don’t know but considering. Perhaps halfway house with glamorous fashionistas.”
So now we just need to see what The Sun’s version of “Glamorous Fashionistas” actually is…
http://www.thedrum.com/node/101812​

The title is more than just a few adjectives knocked together for effect – these are just some of the rejected names for Snow White’s dwarfs.
Hailed by some as the greatest movie ever made, Snow White and The Seven Dwarfs whether it’s your favourite classic or not, was a landmark achievement for Walt Disney.
Growing up with the movie, you may think you know every you need to know but think again. Here’s 25 things you might not have known about this classic.
http://news.moviefone.com/2013/02/07/snow-white-and-the-seven-dwarfs-trivia_n_2639380.html?icid=maing-grid7%7Cmain5%7Cdl39%7Csec1_lnk2%26pLid%3D267669