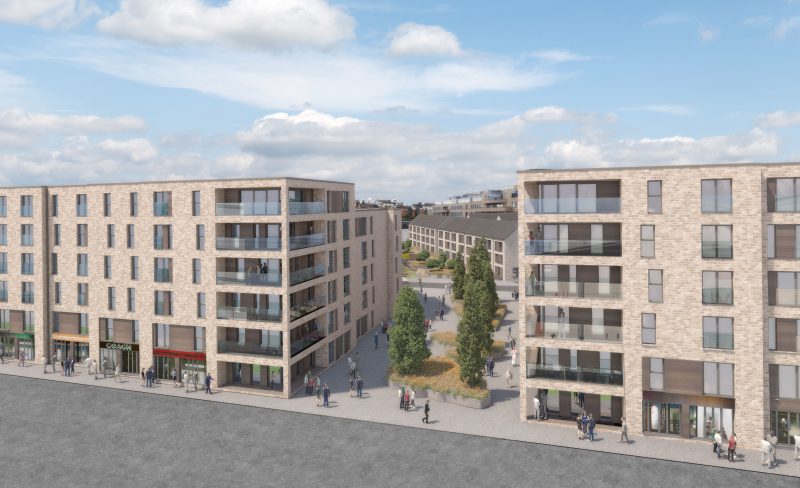 A LONG-RUNNING Leith development has received a timely boost from its supporters ahead of its determination on Wednesday (13 December).

Plans for “Waterfront Plaza” have been praised in a joint letter of support sent to councillors on behalf of Port of Leith Housing Association, Leith Chamber of Commerce as well as Ocean Terminal and a staggering 41 of its businesses.

The letter “strongly urges” support for the residential-led proposals located on historically disused land opposite Ocean Terminal, citing the urgent need for new private and affordable homes and the huge potential boost to the local economy.

This, along with public backing from local Councillor Gordon Munro, as well as the vocal support of Lord Provost Frank Ross, Gavin Barrie and John McLellan is hoped will encourage the panel to deliver the much needed housing.

Craig Lynes, Land Director at CALA Homes (East), said: “The strong support is especially welcome and recognises the importance and complexity of this site.

“It is hugely important that well considered residential developments on brownfield sites can support the delivery of much needed homes across the city.

“A site such as Waterfront Plaza, making use of a disused plot of land and located in such a vibrant part of the city will hopefully get the backing of the committee on Wednesday”.

The Hearing is taking place following a committee in November which unanimously called for a Hearing to assess and consider in more detail CALA Homes’ proposals.

Ahead of the November committee, Lord Provost Frank Ross called for “common sense to prevail” and urged “these houses to be built, not only to provide much needed homes but a boost to Ocean Terminal.”

CALA’s proposals have received widespread backing from across community, housing and business leaders and also includes the support of the Leith Trust.

The development will consist of 388 homes, including 97 affordable homes and will include around 1500 sq.m. of flexible ‘workspace’ units, similar to The Arches development on Market Street, offering a wide range of potential uses including shops, cafes, galleries, creative space and offices ideally suited to start-ups.

It is anticipated that an eclectic mix of ‘workspace’ units complimented with the proposed public realm, to include an urban square and public green space and café building fronting Victoria Dock at Waterfront Plaza will draw more visitors to the area and keep them there for longer, in line with local ambitions to increase the retention of visitors in Leith.

A Hearing to consider and determine the application will be held at The City of Edinburgh Council Development Sub-Committee on 13 December 2017.