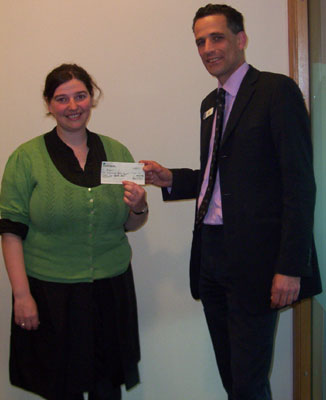 Generous members of staff at the Care Commission’s regional offices in Hamilton have handed over more than £1000 to local cancer charity Maggie’s Lanarkshire, following a day of fundraising.

The money was raised after Care Commission staff at the Princes Gate building in Hamilton’s Castle Street brought in books and unwanted Christmas presents for a tombola and raffle stall.

There was also a home baking sale, a coffee morning, a “name the bunny” competition and a chocolate fountain.

The Care Commission share the building with a number of other organisations including NHS Healthy Working Lives, NHS Audiology, South Lanarkshire Council Schools Modernisation, West of Scotland Housing Association, Careers Scotland and M C Laser Beauty Therapists and members of staff from each of these organisations were also involved in raising funds for the charity.

Maggie’s Lanarkshire offers valuable support and advice to those people affected by cancer. People can drop by, have a cup of tea and sit around the Kitchen table chatting with others in similar situations. The Centre offers relaxation sessions, tai chi and a living with less stress course. There is a lending library to browse or people can simply pause and rest.

Henry Mathias, regional manager for the Care Commission, was delighted to hand over the cheque for £1012.24 following the fundraising day on April 1 and said: “It’s a tremendous achievement to have raised so much money in a single day.

“We obviously hoped to raise a good sum of money but I’m not sure anyone expected a four-figure sum.

“I’m delighted to hand over the money to such a good cause and would like to thank everyone who took part in the day. From people who bought a coffee to those who helped organise the day or who donated prizes, everyone contributed to raising a terrific amount of money for Maggie’s Lanarkshire.”

Julie Burns, community fundraiser for Maggie’s Centre, said: “We’d like to thank the people at the Care Commission for donating this sum of money and for organising the fundraising day in aid of Maggie’s Centres, it was a terrific day and we greatly appreciate all the work that went into making the event such a success.

“We rely fully on voluntary donations making the support from the Care Commission invaluable.”