Mackie’s of Scotland secures a lucrative listing with Marks & Spencer 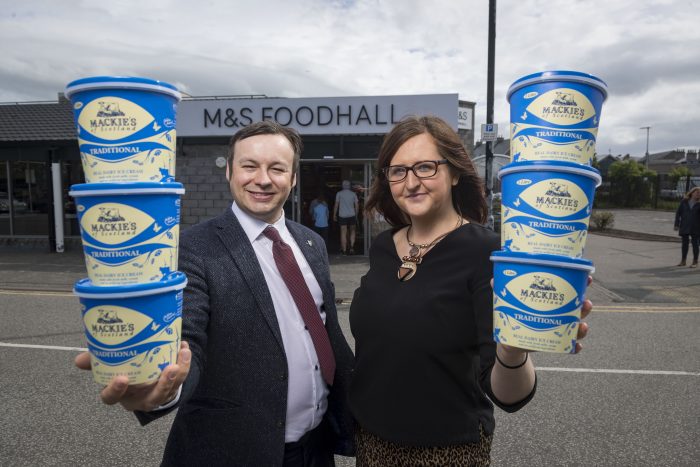 AN ICONIC Scottish brand is set to melt hearts across the country after securing a listing with Marks & Spencer.

Luxury ice cream producer Mackie’s of Scotland has won listings in 80 of the upmarket supermarket stores across the country in a deal worth over £100,000 per annum to the family-run business.

Adding to M&S’s portfolio of “must have” brands, Mackie’s Traditional 1 Litre Real Dairy Ice Cream tubs will now be available in Marks & Spencer.

Mackie’s Traditional, a natural flavour of ice cream without added vanilla, was Mackie’s first flavour and is now the most popular take home tub in Scotland.

The Aberdeenshire-based business, which grew 13% on last year thanks to record sales, currently has 22% of the Scottish premium branded ice cream market, ranking first among its competitors.

Mackie’s hopes that the new contract will help to build on its existing brand share within Scotland.

Bill Thain, National Account Manager, at Mackie’s, said: “We’re delighted to be one of the brands to be welcomed into the prestigious M&S Scottish range. It’s very pleasing to be recognised for the quality and flavour of a product that we work so hard to make right.

“This is an exciting opportunity and we hope that it will make our product more readily available to our existing customers while also attracting new ones.” 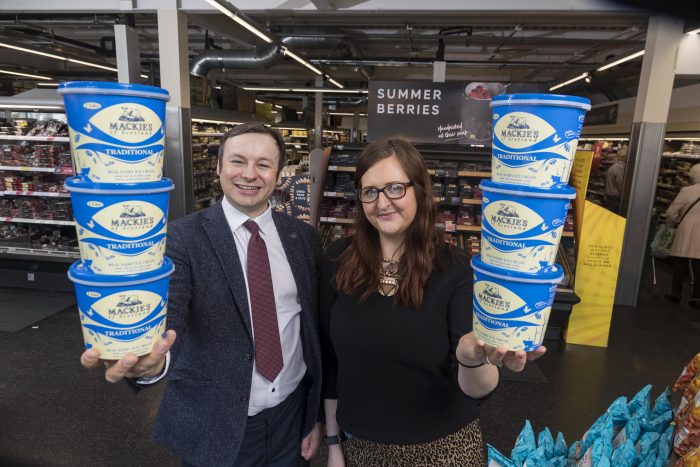 Unlike the majority of its competitors in the UK ice cream market, Mackie’s is a small independent company producing the milk and the cream that goes into its ice cream as well as its own packaging on its family farm, Westertown, in Aberdeenshire.

In keeping with its ‘sky to scoop’ philosophy, the milk comes from Mackie’s own herd of cows, while the farm and factory are powered by the renewable energy that it generates through wind turbines, solar panels and a biomass plant.

Emillie Emblin-James, Frozen Buyer at M&S, said: “We know that our customers will be excited to see that these well-loved Mackie’s tubs are now available in our stores.

“Mackie’s attention to being a green and ethical company while delivering a high-quality product are among the many reasons why we were keen to have its tubs on our shelves.

“We look forward to welcoming Scotland’s best-loved ice cream brand to our stores just in time for the sunny weather. This family favourite is the perfect product for bringing everyone round the table this summer.”

Mackie’s has just announced a £4million project to replace its old freezers with low carbon, power efficient units run on ammonia – a natural refrigerant gas that poses no threat to the environment.

M&S has had a big focus on new Scottish products over the last few months as it concentrates on its food offerings.

WHY NOT LET OUR FOOD AND DRINK EXPERTS SERVE UP YOUR STORY?