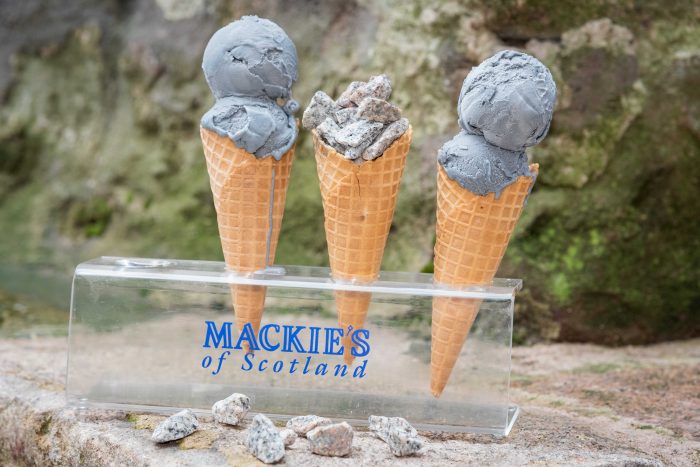 AN ICE cream that has been made to look like Aberdeen’s granite buildings has been created by Scotland’s luxury ice cream maker for a crime writing festival in the North East.

While local talents have been drafting up their dark stories for the city’s popular Granite Noir Festival, Mackie’s of Scotland has written up a new dark recipe, turning their most popular ice cream flavour a sparkly carbon grey.

Taking place over the weekend of 22nd February, the festival that has inspired Mackie’s new look is now in its third year after making its mark on Aberdeen’s calendar.

“The sparkle in it is made with a silver lustre which gives it a bit of excitement and looks like the sun hitting the granite.

“The taste is every bit as good as our Traditional ice cream – but as the city shows off its creative flair, we thought that this was the chance for a new ice cream too. We’re keen to support our city’s talent as Aberdeen moves to become an important hub in the noir scene.” 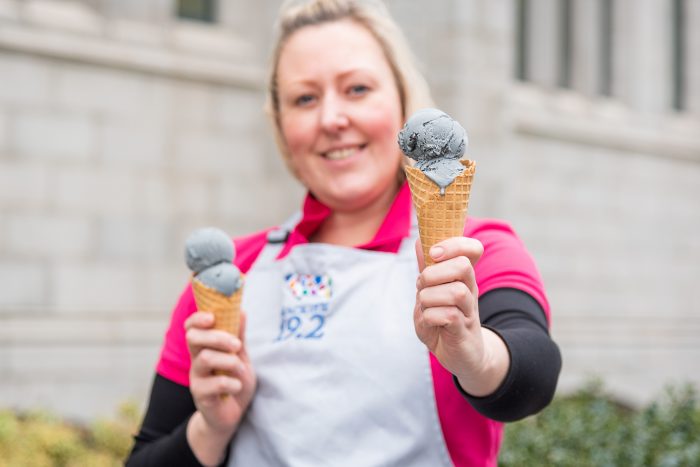 Noir fans will be able to scoop a piece of the Aberdeen-inspired limited edition design from some of The Granite Noir venues including His Majesty’s Theatre and also along at Mackie’s 19.2 ice cream parlour.

Jane Spiers, Chief Executive of APA, said: “As the festival explores the appeal of dark stories, it also focuses on nurturing and celebrating local literary talent.

“We have a great working relationship with Mackie’s – they really get behind us and truly recognise the importance of promoting the arts around Aberdeen.”

Its limited edition Granite Noir flavour will run for the duration of the festival which ends on Sunday 24th February.

This isn’t the first time Mackie’s have concocted a ‘Most Wanted’ creation. In 2017, the brand introduced a limited edition Buttery and Jam ice cream which was an instant hit.

The Aberdonian flavour was such a hit that Mackie’s decided to keep the flavour on as a permanent part of their parlour range.

Pauline added: “For now, our Granite Noir ice cream is limited edition – but then again we’ve thought that other flavours were limited edition before and they’ve ended up staying as they’ve been so popular.

“It really depends on what the customers love – we’re led by them when it comes to those decisions.”

Mackie’s have around 17 new and exciting flavours planned ahead for Mackie’s 19.2 parlour this year alone and they are currently working on two new flavours for launch in the popular range of 1 litre tubs – with the first coming in Spring 2020.

Let us help turn your business stories into a Food and Drink PR success.

Well-versed in all things delicious, our team of PR professionals can take the heart of your business and use it to inspire others.

With experience on a number of food and drink clients we know how to turn heads and the everyday into something special. We’d love to hear from you and help you transform your product into results.