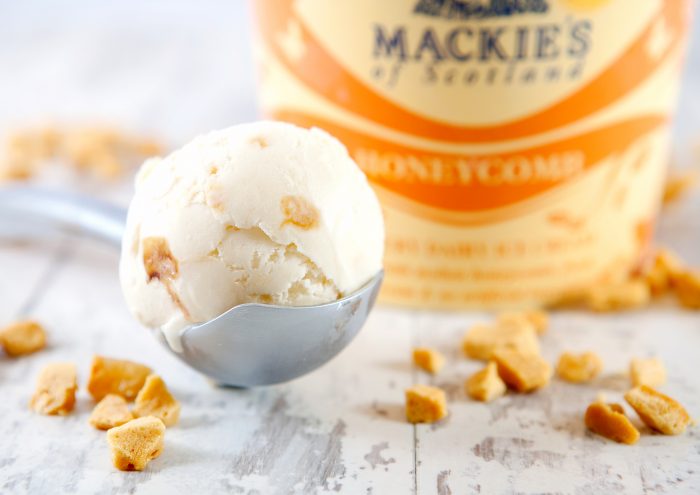 SCOTLAND’S best-loved ice cream brand is taking on the industry giants after landing a milestone UK-wide listing in a major supermarket.

Mackie’s of Scotland has secured space in 457 Sainbury’s stores for its honeycomb flavour – which will join its famous traditional real dairy ice cream in the freezer aisles.

Worth a potential £700,000 at retail value, the ‘second’ listing is a major step for the Aberdeenshire family firm, which has previously struggled to get English retailers to stock flavours beyond its original bestseller.

With annual sales of honeycomb reaching close to one million litres in Scotland alone, Mackie’s hopes this listing will encourage more retailers across the border to stock further  flavours – so that fans elsewhere can enjoy the wide range available to Scottish customers.

Stuart Common, Commercial Director at Mackie’s of Scotland, said: “To secure this opportunity in Sainsbury’s is a huge achievement for us at Mackie’s that we are especially proud of as an independent company.

“Hopefully this will introduce our ice cream to a new audience which will allow demand for our product to grow as more people taste the differences in real dairy in ice cream.

“Honeycomb has established itself as our second bestseller. As the handmade candy pieces mix with Mackie’s traditional ice cream, they gradually melt leaving small pockets of sweet honeycomb sauce”.

Due to the nature of the retail industry within the UK, having a new product nationally listed by a main supermarket has become increasingly difficult for independent companies. This is  especially true within the ice-cream industry, where 90% of sales come from brands owned by large multinational groups.

Unlike the majority of its competitors, Mackie’s produces all the main ingredients for its honeycomb flavour at its Aberdeenshire farm.

The milk comes from the family firm’s own herd of cows while the honeycomb candy pieces and the tubs containing the ice cream are made on site.

This whole process is powered by the renewable energy generated on the farm, primarily through four turbines, a large solar farm and a biomass plant.

Mackie’s also recently announced that winter sales accounted for nearly half of revenue in 2016 – a rise driven by new listings and limited edition seasonal flavours.

Want to find out how your business could benefit from food and drink pr?

Get in touch with our team of experts today and discover how we can help you score some tasty coverage! Call us on 0132 561 2244, or by filling in the contact form below.