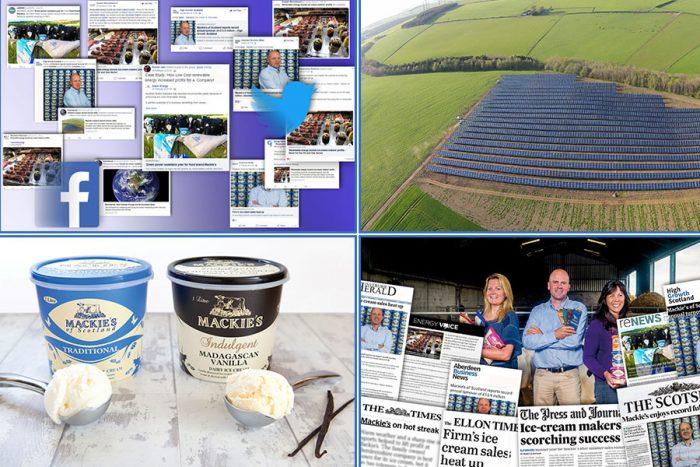 Leading Scottish food brand, Mackie’s of Scotland has celebrated a record year of success, with an annual turnover of nearly £14 million.

Thanks to boosted ice cream sales and the production of its own renewable energy on-site at its Aberdeenshire farm, Mackie’s went from strength to strength during the financial year ending May 2018 – resulting in the company’s turnover increasing by 13% on the previous year.

We shared the news of the confectionary firm’s success with national and industry titles, securing a total of 15 items of coverage across traditional media and digital outlets.

“Over the last five years, Mackie’s have invested a further £3.9 million in solar panels and a wind turbine.

“We are continuing with further investments on the site to make the ice cream production more energy efficient and to help our advances to become 100% self-sufficient in renewable energy by 2020.

Sharing the financial success of Mackie’s is vital in maintaining its position as a leading business in Scotland’s consumer economy.

By sharing the news with publications in the renewable sector, we were able to spread the word of Mackie’s ‘sky to scoop ethos’ – meaning that everything from dairy products to packaging is produced on site, including 70% of the firm’s energy generated on the farm – to an engaged and relevant audience.

Why not find out what our food and drink agency could serve up for your business?