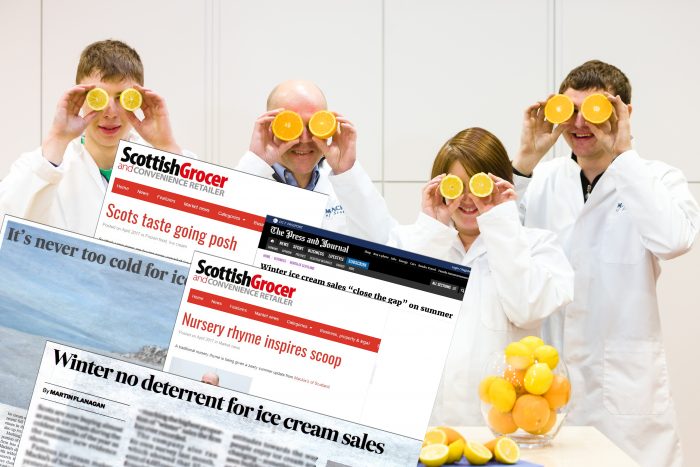 COVERAGE in the Scotsman, Press and Journal and Scottish Grocer was the 99 on top of a great week for Mackie’s of Scotland.

Mackie’s winter trends report revealed that Scots won’t let the chilly weather curb their love for Ice-cream, as it was recorded that people buy almost as much Ice-cream during the winter months as they do in the warmer months.

Reporting an increase in revenues during the colder months of 8% year on year showed an interesting change in consumer habits.

Mackie’s also revealed a new St Clements Ripple flavour Ice-cream, a Sicilian lemon flavoured ice-cream rippled with an all-natural orange sauce as an ode to the childhood Rhyme “The Bells of St Clements”.

All in all these two stories generated:

On top of this delicious coverage the team were lucky enough to try St Clements Ripple and thoroughly enjoyed the sweet and zesty flavour of this citrus combination!

Watch as Cat and Melissa race to present the new St Clements Ice-Cream in delicious orange and lemon bowls!

Want to find out how your business could benefit from our Food and Drink PR services?