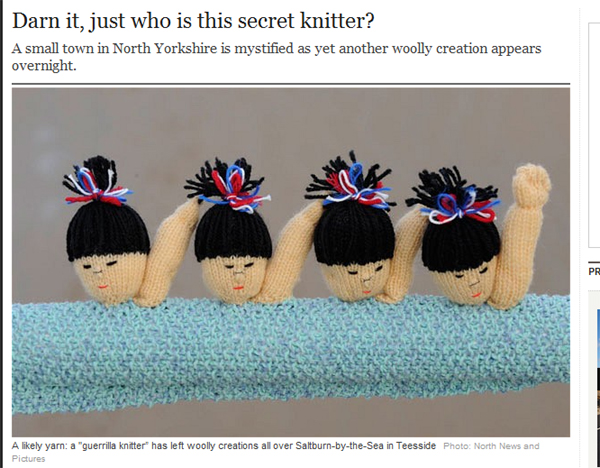 If you would like to find out anything more about the Holyrood team why not check out our Facebook and Twitter as well as our new Google+ and LinkedIN pages.

Since October last year, a mystery knitter has been “yarnbombing” the small town of Saltburn-by-the-Sea in North Yorkshire.  It all started with a set of knitted books, found tied to a railing outside the local library.  Various creations have been found dotted around the town since then, but it is the latest piece of work which is really impressive – an Olympics themed scarf, found tied around the railings on the pier. It features miniature knitted swimmers, footballers and weightlifters and goes on for over 50 yards.  The locals are certainly pleased with the works of art and say they will stay put for as long as possible. http://www.telegraph.co.uk/news/newstopics/howaboutthat/9133686/Darn-it-just-who-is-this-secret-knitter.html

It’s every dog owner’s worst nightmare.  You take Fido out for a walk and he relieves himself in the most awkward and embarrassing of places.  Kids lunchboxes, buggies (I now refuse to walk my friends spaniel), in the middle of a busy street; it’s never a pleasant experience.  So imagine the humiliation if your pooch decides to poop whilst competing at Crufts!This actually happened yesterday to one unfortunate competitor, whilst taking part in the agility course at the national event in Birmingham.The pair were disqualified and the owner was handed a plastic bag to pick up the mess whilst being watched by a crowd of 6,000 canine enthusiasts.  http://www.youtube.com/watchfeature=player_embedded&v=q-EX7OgWW38

Online news site Mashable has become one of the biggest websites in the world in the past five years, thanks to its devotion to news about soical media including Faceboook and Twitter and popular gadgests, like Appl’s iPads and iPhones. Now it’s rumoured the site is to be bought by news giant CNN for around $200m. Which will no doubt mean a handsome pay day for the young Scots entrepreneur who founded the site, Pete Cashmore from Aberdeenshire.
http://www.reuters.com/video/2012/03/12/reuters-tv-is-cnn-buying-mashable-sxsw?videoId=231529413&videoChannel=117757

After moving into a flat on my own just before Christmas I found out how dull the weekly activity of food shopping actually is. With a few attempts of taking the trolley round the supermarket I decided to convert to online shopping where it’s surprisingly easy and pain free. If it’s something you enjoy doing you may find yourself liking this new game on Tesco’s facebook page. Delivery dash which is aimed at female shoppers is a game which involves you trying to pack shopping baskets for friends in a limited time period whilst getting the order right. The reason that Tesco have aimed this game at women is that recent research has shown that the average casual player of social games is a 41 year old woman. Not sure it’s something I would like to do in my spare time- I think doing it for real once a week is definitely enough.http://www.brandingmagazine.com/2012/03/10/tesco-launches-delivery-dash-facebook-game/

A marketing stunt where homeless people were turned into walking internet hotspots with T-shirts proclaiming ‘I’m a 4G hotspot’ has caused outcry in Texas. Branding agency BBH was forced to defend its ‘Homeless Hotspots’ initiative after it was described as ‘dystopian’ – and lambasted as a ‘shameful, hideous, patronising, dehumanising idea’ by British brand strategist Luke Scheybeler. The Homeless Hotspots initiative was trialled at the SXSW music and technology conference in Austin, Texas – with a suggested price of $2 per 15 minutes. A promotional video shows off one of the wi-fi vendors, Clarence, a homeless man from New Orleans who lost his house in Hurricane Katrina, and has been in financial trouble since. http://www.dailymail.co.uk/sciencetech/article-2113959/Homeless-people-turned-walking-wi-fi-hotspots-2-15-minutes-SXSW.htm