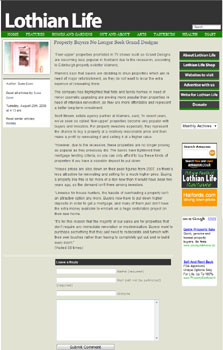 The Capital’s leading property solicitor Warners has been celebrating another Scottish PR boost after being featured in a leading Lothians magazine.

Lothian Life ran a feature about the firm’s latest analysis of the local property market – including a claim that housebuyers in the region are shunning “Grand Designs” in favour of more moderate property investments.

Warners believes that, due to the economic recession and tighter restrictions on mortgage lending, buyers across the Lothians are less likely to buy a delapidated property in order to restore it to its former glory, as seen in the hit TV show Grand Designs. Instead, the firm says that buyers are now more likely to buy properties that only need minor cosmetic improvements.

The full coverage appeared in Lothian Life and was the result of a sustained media campaign by Holyrood PR PR in Scotland.