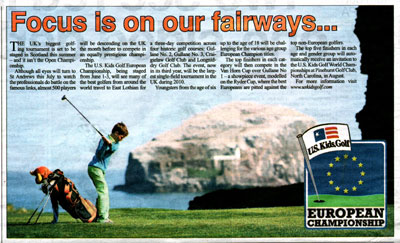 Taking place in Scotland, the competition will be the biggest golfing event staged in Scotland, seeing 500 players do battle on some of the country’s most historic courses.

Staged from 1-3 June some of the best young players from all over the world will meet in East Lothian to showcase their golfing skills.

Players from as young as 6 and up to the age of 18 will be taking part in various age group categories and the winner of each will then compete in the final showpiece event.  Based around the Ryder Cup the top European and the top non European players pit it out together to win the coveted Van Horn Cup.

The top five finishers in each age category will also automatically recieve an invitation to the U.S Kids Golf World Championships and Pinehurst Golf Course in North Carolina in August this year.

The full article can be found in the East Lothian Courier and was secured as part of successful PR and social media campaign carried out by the Holyrood PR.