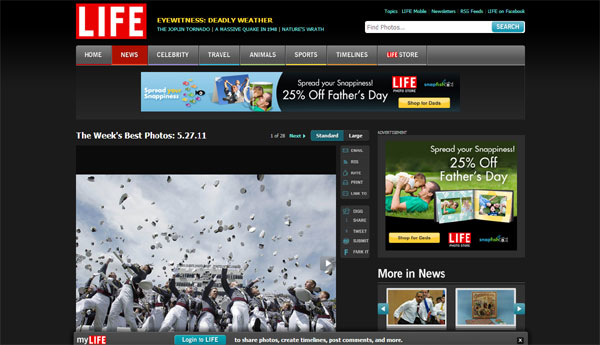 Here are today’s fantastic links giving you the perfect and also an insightful way to spend the week. Whilst you have the weekend to mull them over, why not send us your comments or link suggestions and give us a great way to start the week on Monday? You can leave comments on our Facebook and Twitter pages.

We tend to think of archaeologists one of two ways. Either they’re beardy old gents who pour over books and relics in museums, or they’re all-action heroes like Indianan Jones who bravely protect historical artefacts (from the Nazis, presumably).However, modern day explorers and archaeologists are proving more tech-savvy than ever, and a group of them have just unveiled the latest equipment they’re using in their work – infra-red cameras that blast the surface of the earth from space. Which is just awesome. This new technology checks for underground structures and buildings that have been long-hidden from view on the surface. It’s already revealed more than 3000 ancient sites in Egypt that were believed to have been lost forever, including a new group of pyramids that archaeologists are now planning to excavate and explore to discover the treasures they contain. If only Indy had used the same technology. He’d have found that Ark of the Covenant in no time.

HOW MANY WORDS IS THIS LOT WORTH (Scott)

In this fast moving age of contstantly updating content and the YouTube and Facebook generation brilliant photography can help us appreciate a frozen moment. Here Life magazine lists the best photos from the past week. Take five minutes out to savour them.

If like me the thought of spending a weekend camping fills you with dread, then spare a thought for these thrill seeking campers, who hitch tents 4,000ft off the ground on a sheer cliff face. The dare devils use the specially designed tent bags to get some much needed rest during climbs up some of the world’s highest natural landmarks. The pictures which appeared on the Daily Mail online were taken by adventure photographer Gordon Wiltsie who is currently showcasing a series of his images at the Mountain Light Gallery in California, featuring an impressive selection of various climbs from all over the world.

The Hangover Part II hit cinema’s yesterday and reviews, like this one in The Guardian, are just as expected. The film is pretty much a copy of the first, or as described here “a shot for shot remake”. For example Las Vegas is replaced with Bangkok, the tiger is now a monkey and they lose the bride-to-be’s brother as opposed to the groom. Despite the dire feedback, this cash cow will probably still make the creators quite a lot of money as everyone will be hoping to see the same genuis that appeared in the first.

TETRIS AND THE FINGERS OF FURY (Scott)

I’m not much of a gamer, thought I did have a crack at Tetris back in the days when the only way to play games was in an arcade. Obviously this guy made a much better job of mis-spending his youth. Around about three minutes into the video, I suspect even  accomplished gamers would struggle – and it’s a mystery to me how this “Tetris Grandmaster” can play at this speed when the pieces become invisible. As this post points out: “It’s like he’s playing blindfold speed chess on the hood of a stock car”.