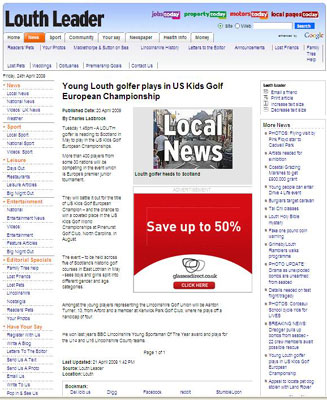 Popular Lincolnshire newspaper, the Louth Leader, has added to the positive publicity in the run up to the U.S. Kids Golf European Championships with an article on local youngster Ashton Turner.

The 13-year-old is one of 400 youngsters from 30 countries who will be bidding to become the 2009 U.S. Kids Golf European Champion in Scotland in May.

And now his local newspaper have got behind him in his bid by making him headline news in the county.

The article, headlined Ashton, 13 on course for Scottish golf test, tells how he was recently named BBC Lincolnshire Young Sportsman of the Year and already plays for the county’s under-14 and under-16 teams.

As well as making page three in the newspaper, the article featured online and can be read by clicking here or visiting http://www.louthleader.co.uk/news/Young-Louth-golfer-plays-in.5187351.jp