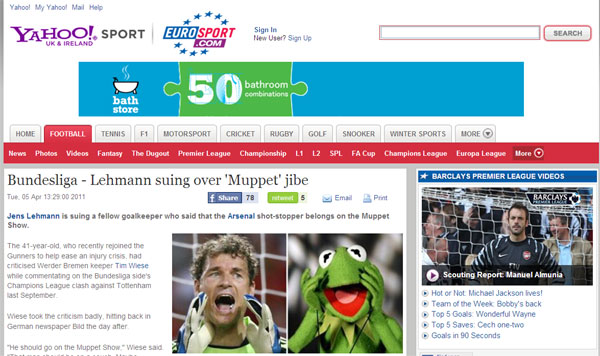 Like our top five links but think you could do better? Then drop us a link to your hot picks on our facebook or twitter pages and you never know they may make the cut in tomorrow’s installment.

Light Sabres at the ready! The latest video to take YouTube by storm is this fantastic footage of badminton players using light sabres instead of badminton bats. At first glance it would seem that the sporting world has gone Star Wars mad, but unfortunately these aren’t real light sabres but a clever piece of computer jiggery magic and so far the video has had over 900,000 views in just 2 weeks which is pretty impressive! Check out the video below and why not tell us what sports you would like to see being played with light sabres – snooker or pole vaulting perhaps?

The 17th anniversary of Kurt Cobain’s suicide has just passed. This article looks at how the grunge icon’s hometown newspaper covered the breaking story. Amazing how much the speed of the news cycle has changed with the advent of search engines and social media. Amusing to note the most telling reaction of today’s Twitter users commenting on the sad anniversary: “I feel old”.

GOALKEEPER IS A RIGHT MUPPET (Adrian)

It’s been a bit quiet in the Premier League since German mentalist and goalkeeper Jens Lehmann left Arsenal in the late 2000s. Renowned for fighting with team-mates, biting footballs, holding a decade long vendetta against fellow international keeper Oliver Kahn and generally being one of the biggest nutters in the game, his move away from England was a sorry sight for many top flight footie fans. However, it seems that it isn’t only British supporters that think the German shot stopper is a bit crazy. After a public war of words, fellow pro keeper Tim Wiese – who plays for Bundesliga club Werder Bremen – blasted Lehamann as a nutcase who deserves to be on the Muppet show. And, in a bizarre twist of events, he is now being sued by Lehamnn for defamation as a result of the muppet jibe. Maybe it’s only a matter of time before Wayne Rooney responds to the Shrek jokes in the same way…

HE STARTED IT (Andrea)

A man in America has been arrested for barking at a police dog – the best bit about this story is his response when officers confronted him for antagonising the pooch. “The dog started it”. That’ll really hold up in court – must remember that one if ever in front of a judge.

GOAL OF THE SEASON? (Raymond)

I wouldn’t normally want to trumpet a football story as I know it’s not everyone’s cup of tea – but there a just times when you have to. Have you checked out this goal from last night’s Champion’s League Inter v Schalke game?It has all the hallmarks of Zindane’s genius volley in the Champion’s League final at Hampden – except he’s 40 yards further back at the half way line. I’ve already watched it five times in a row….