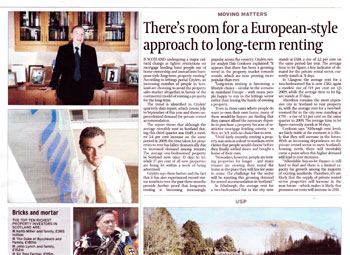 Letting portal Citylets has celebrated a new PR in Scotland success after being featured in a national newspaper.

The Scotsman reported on the latest rental market analysis from Citylets in its property section, which explained how the country was starting to lean towards the European trend of long-term renting.

The results were revealed in the latest quarterly data report from Citylets – widely viewed as the most in-depth analytical tool in the Scottish lettings sector. The report showed that rents are continuing to remain strong across the country as many tenants choose to take up longer leases, similar to the scenario currently seen in cities such as Paris and Berlin.

The Scotsman coverage was the result of a dedicated PR in Scotland strategy for Citylets, carried out by the Holyrood PR.