Let The Bells Ring Out With Our 5 Fab Web Links! 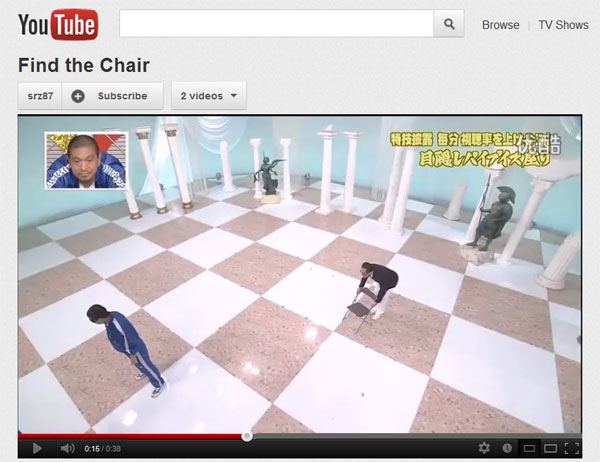 The Japanese have done it again with another weird game show format-Find the Chair! You might think there will be more to this game other than what the title implies but it simply invovles a blind folded man lying in wait for the host to loudly place a chair behind him before he rampages to find it!
I’m moving to Japan to be a game show creator!
Watch the clip to see just how well he finds his chair!
http://www.youtube.com/watch?v=0WsiBs-PXTM&feature=related

The winners of the 2012 National Geographic Traveler Photo Contest have just been announced and the results are stunning.
12,000 entries from photographers in 152 countries were received and just 12 made the final cut.
Photos portraying scenes in Afghanistan, Chile, Burma, The Faroe Islands and Madagascar are among the finalists, which range from peaceful landscapes to action shots.
I love the underwater surfing shot taken in Fiji – an amazing perspective.
http://travel.nationalgeographic.com/travel/traveler-magazine/photo-contest/2012/entries/gallery/winners/#/10​

Everyone knows that cats are supposed to be the aloof, self-contained and self-sufficient household pet; far superior to the dog due to their ability to appear completely uninterested in most things. Personally I prefer dogs, and usually I’d argue cats are just less bright, explaining their lack of interaction. However, I seem to have found a video that proves there may well be method behind cats’ madness. For all you sceptics out there, here is the proof that cats really do have a good idea of what’s going on. If this cat is unaware of how his actions are taken by the human filming him, I’ll eat my cat…I mean hat.
http://www.huffingtonpost.co.uk/2012/08/14/funny-19-second-cat-video_n_1774729.html?ir=UK+Comedy​

LOVE IS IN THE AIR (Graeme)

When I proposed to my, then, girlfriend, I just did the traditional down on one knee accompanied with a wee speech. However, ‘Jack’ from the States has put me to shame, he proposed to his better half, Teresa, with a little help from a Flash Mob. Not only did ‘Jack’ hire a flower-wielding Flash Mob to help him pop the question, he also managed to squeeze in a quick ‘Stars in Their Eyes’ costume change, impressive. It’s too late for me, but other guys out there thinking about taking the plunge, take note.
http://www.metro.co.uk/weird/908768-romantic-flash-mob-wedding-proposal-leaves-woman-stunned

A ‘Who’s Your Daddy?’ Van is driving around New York, offering dads the chance to make sure that their children are theirs. Costing around £200-£300, men just have to give a cheek swab. Then there is a laboratory analysis and the paternity results are available in a couple of days. So far, there have been plenty of positive results, but, unfortunately, there has been a lot of heartbreak with dads finding out they are not really the biological dad to their children.
If they bring this van over to the UK, would you get tested?
http://news.sky.com/story/973246/whos-your-daddy-van-offers-dna-test