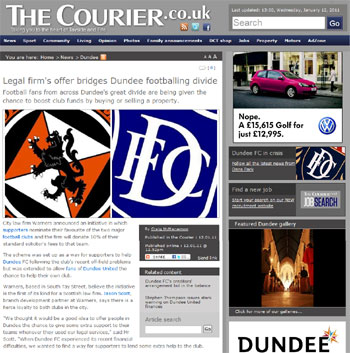 Warners has received new prominent coverage in one of Tayside’s biggest papers after unveiling a new football sponsorship deal for its customers.

The Courier & Advertiser reported on how the firm had introduced a new deal for Dundee football fans – where 10% of their legal fees would be donated to either of the city’s professional teams.

Under the terms of the initiative, any customers who buy or sell a property through Warners – or make a will with the firm – will be asked which of the city’s teams they support. After that, 10% of their legal fees will be donated by Warners to the team of their choice – either Dundee FC or Dundee United FC.

The full story can be viewed on the Courier & Advertiser website and is part of an ongoing PR in Scotland campaign maintained for Warners by the Holyrood PR.