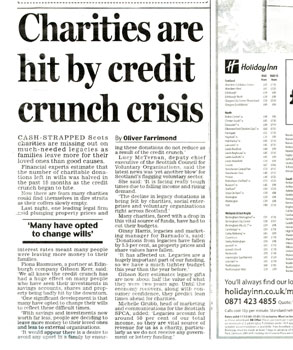 The firm was featured in the Scottish Daily Mail, which reported on how charities were being hit by the credit crunch due to fewer people leaving legacy payments in their wills.

Gibson Kerr said that many charities across Scotland were likely to receive smaller donations from wills, as people choose to give more of their money to their families. Partner Fiona Rasmusen said that, as share prices and savings were now worth less due to the recession, people were more likely to leave larger sums to their families rather than leaving cash to charities.

The story in the Daily Mail was the latest high-profile piece of newspaper coverage for Gibson Kerr, which is supported by Edinburgh PR and media experts the Holyrood PR.