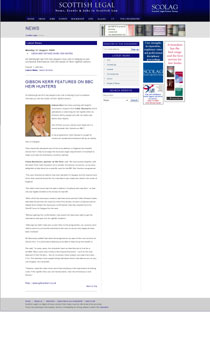 Edinburgh law firm Gibson Kerr has been celebrating after winning new headlines in one of Scotland’s leading online law publications.

The firm, which has more than 100 years experience in the Capital, was featured in Scottish Legal News regarding a series of jobs it had performed behind-the-scenes for the BBC1 show Heir Hunters.

Gibson Kerr has worked closely with Celtic Research – one of the companies featured in the hit TV programme – and provides help for finding the rightful heirs to unclaimed fortunes. The firm performed complex legal undertakings in Scotland on some of the cases on the show, to ensure that inheritances reached their rightful owners.

The full coverage appeared in Scottish Legal News and was the result of a dedicated media campaign set up by Holyrood PR PR in Scotland.