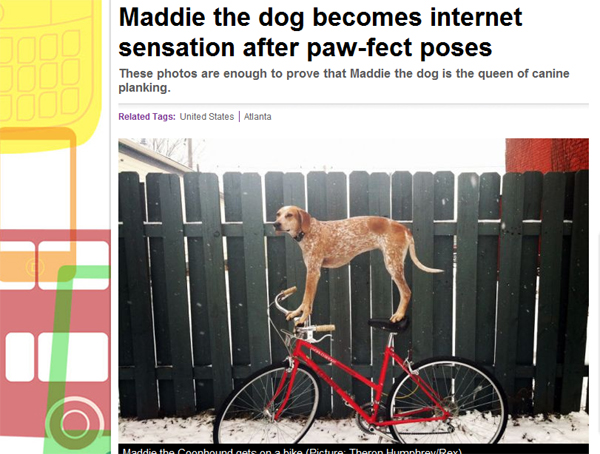 When Theron Humphrey the 28 year old photographer from Atlanta adopted puppy Maddie, he decided to make her the subject of his work.  The result are these hilarious snaps of the canine partaking in some “planking”.  The puppy has quickly become an internet sensation and the duo say they hope to travel America and get photos of her planking in all 50 states.

A racing car driver has seen his followers increase by over 100,000 after he tweeted up to the minute updates about a fireball which occurred after a crash at the Daytona 500 race in the U.S. After witnessing the crash the driver halted his car and started tweeting what he could see to the world causing a twittersphere storm as thousands signed up to his tweets to read his updates, showing the power of twitter and the citizen journalist. After the incident the driver was caught up in a minor crash of his own and as the guys at Mashable say – let’s hope it wasn’t a case of tweet driving!http://www.thedrum.co.uk/news/2012/02/28/race-car-driver-tweets-world-about-fire-drama-daytona-track

LINKEDIN JUST GOT EVEN BETTER FOR BUSINESS (Scott)

I’m a big fan of LinkedIn, which takes all the best bits of social media and makes them relevant for business people. Yet I’m constantly amazed how few of those signed-up for LinkedIn actually make much use of it. I regularly give LinkedIn training to clients and other businesses to help them with this. Hopefully innovations like this ‘Follow’ button for companies will see more businesses getting value from LinkedIn. http://blog.linkedin.com/2012/02/27/linkedin-follow-button-for-companies/

McDonald’s clientele in France are in for a treat after the fast food chain has announced an addition to their menu in the form of French favourite, the baguette. McBaguette which is designed to appeal to more upscale diners will be filled with French made emmental cheese and mustard along with their signature beef burger. The tasty treat will be available for French diners from April in the 1,228 restaurants across France. If you’re visiting the country anytime soon you can feel real French and pick up your McBaguette for just £3.80. Ooo la la….http://www.dailymail.co.uk/news/article-2107877/Finally-French-fries-Frances-McDonalds-introduces-new-burger-filled-baguettes-lure-customers.html

Irish bookmakers Paddy Power has unveiled it’s latest publicity stunt, an advertising campaign featuring a hit man tranquilising loutish race goers at Cheltenham Festival. Like many of their adverts, it was deemed unsuitable for TV and so the 40 second clip has been relegated to the realms of YouTube where it has attracted 200,000 views in less than a week. The controversial campaign has been released ahead of the March race meeting in response to a post on the company’s Facebook page by a fan which said, “Let’s hope the chavs don’t ruin Cheltenham like they did Ascot”. Paddy Power spotted the opportunity and responded in a brazen way, with the advert promising “to take care of the chavs – veterinary style”. A shameless PR stunt indeed but rather amusing all the same! http://www.youtube.com/watch?v=Yu5Q86V8lT4