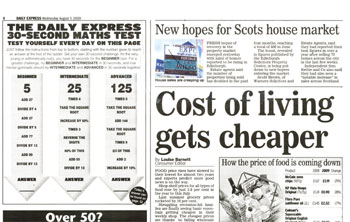 The firm, which has been top of the ESPC for the past decade, was featured in the Daily Express after releasing new sales figures – which showed that it had sold a weekly average of 14 properties over the past five weeks.

The statistics were used as part of a wider story showing how house prices in Scotland were starting to remain steady, which experts have welcomed as a positive sign for the market. Warners estate agency partner Scott Brown added that, although the stats were still down on their peak figures from 2007, he was cautiously optimistic about the future of Edinburgh’s housing market.