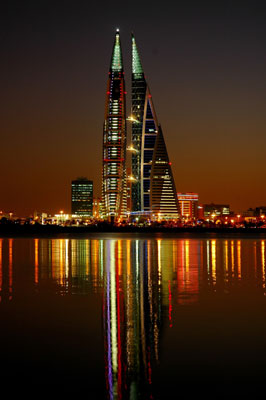 A Scottish company has scooped a top industry award for its innovative project to light up one of the world’s most iconic modern buildings.

LDP International were awarded first prize in the ‘Best Use of Exterior Lighting’ category at the PALME Middle East awards, which celebrates achievements in the categories of AV, audio technology and lighting design.

The towers were built in 2008 by the multi-national architectural firm Atkins. It is the first skyscraper in the world to integrate wind turbines into its design – the turbines produce up to 15% of the towers’ electricity.

He said: “From the start we wanted to create a fully integrated lighting solution which emphasises and enhances the strength of the Atkins design.

“The coastal location of the building provided us with inspirational opportunities for interesting play and interaction of movement of light, enhancing the iconic features of this recognised building.”

Alex Heuff, Exhibition director of PALME Middle East said: “With developments in audio, lighting and AV sectors in the Middle East, these awards have become very competitive and has increased the quality of the products on offer.

“There were fierce battles in all the award categories but the winners stand out in each field and prove how technologically advanced companies in the Middle East are.”

Douglas Hamilton added: “We are delighted to have received this award which recognises the combined effort with the Atkins team.  We are encouraged that such design strength is recognised in such a competitive environment.”

The Bahrain World Trade Centre is not the first award winning collaboration between LDP International and Atkins.  LDP International was key consultants during Atkins design of the Shangri-La’s Barr al Jissah Resort and Spa in Muscat, Oman. This partnership lead to the collection of two awards at the Middle East Lighting Design Awards (MELDA) 2007 winning the best use of lighting design in the hospitality and leisure category and also the Middle East Project of the Year.

Building upon this established and successful partnership, Atkins and LDP International, have teamed up yet again to work on the exterior façade and landscape lighting of the IPIC HQ commercial offices tower project in Abu Dhabi.

Working creatively with architects, consultants, designers and clients, they provide advice, design and implementation services on both small and large scale projects.