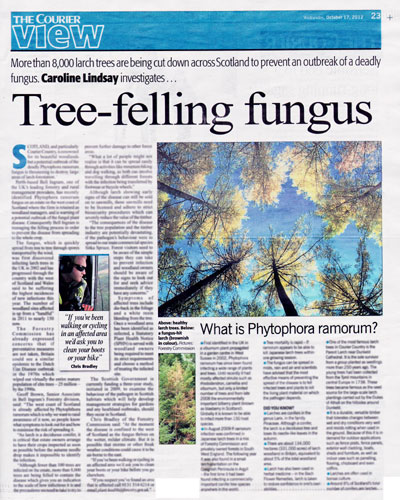 News of the disease came after Bell Ingram warned of further outbreaks of the disease unless it is quickly contained. The Perth based firm recently identified Phytophora ramorum fungus on an estate in West Coast Scotland where the firm is retained as woodland managers. Consequently Bell Ingram is managing the felling process in order to prevent the fungus from spreading to the whole crop.

The fungus, which is quickly spread from tree to tree through spores transported by the wind, was first discovered infecting larch trees in the UK in 2002 and has progressed through the country with Scotland and Wales said to be suffering the highest incidences of new infections this year.

The Forestry Commission has already expressed concerns that if preventative measures are not taken, Britain could see a similar epidemic to the Dutch Elm Disease outbreak in the 1970s, which wiped out virtually the entire mature population of elm trees – 25million – by the 1990s.

Geoff Brown, Senior Associate in Bell Ingram’s Forestry division, has been appointed as an Approved Agent, and will now be able to offer woodland owners his expert advice on identifying and managing the spread of the fungus.

He said: “The west coast of Scotland is  already  affected by Phytophthora ramorum which is why we want to raise awareness of it now, so people know what symptoms to look out for and how to minimise the risk of spreading it.

“As larch is a deciduous conifer, it is critical that estate owners arrange to have their crops inspected as soon as possible before the autumn needle drop makes it impossible to identify the infection.

“Although less than 100 trees are infected on the estate, more than 8000 trees are being felled to contain the disease which gives you an indication to the scale of how  infectious  the disease is and the precautions we need to take to try and prevent further damage to other forest areas.

“What a lot of people might not realise is that it can be spread easily through activities like mountain biking and dog walking, as both can involve travelling through different forests with the infection being transferred by  footwear or bicycle wheels.”

Approved agents offer woodland owners advisory services including site assessments and can provide a full service to achieve Statutory Plant Health Notice requirements imposed by the Forestry Commission and to fulfil Health and Safety regulations for the organisation and supervision of timber sales for road haulage.
The full coverage was in The Courier on behalf of Bell Ingram thanks to an ongoing PR campaign with Holyrood PR.