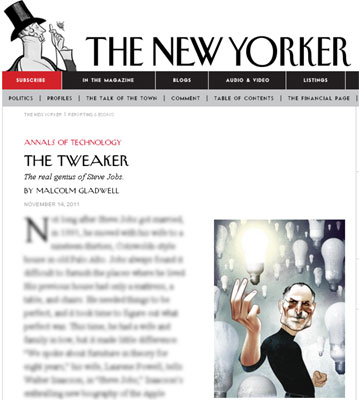 DOES THIS COUNT AS A HATCHET JOBS? (Scott)

Immediately after his death, the world was abuzz with eulogies to Apple founder Steve Jobs. Like millions of other people, I am now reading the biography of this complex character, which came out just days after his death from cancer. The book, by renowned biographer Walter Isaacson, is an uncomfortable an uncompromising portrait of the man who transformed the film, music, book and personal computing sectors.
This Malcom Gladwell review is among the first high-profile articles wrestling with how to consider a man who was consistently unpleasant and unlikeable, without diminishing the wonder of his numerous creative successes.
I suspect the result will annoy many Apple cultists – by tempering the Jobs’ genius by labelling him a ‘tweaker’.
http://www.newyorker.com/reporting/2011/11/14/111114fa_fact_gladwell?currentPage=all

We are not even half way through November yet but there is already a Christmassy feeling in the air and this advert from John Lewis will definitely add to that. Titled ‘For Gifts You Can’t Wait To Give’ it features a wee boy who is quite obviously looking forward to Christmas day and the anticipation and sense of time moving slowly certainly does bring back child hood memories of waiting for the magical moment of waking up on Christmas morning. Yet there us a clever twist to this advert – rather than ripping open his presents when he does wake up on Christmas day, he casually walks past his presents and instead hunts out the present he has bought for his parents presumably from John Lewis. It really got me into the festive spirit when I watched it this morning – but the real Christmas advert for me has to be the Coca Cola advert once that has appeared on our screens then I really will know it’s nearly Christmas!
http://www.youtube.com/watch?v=pSLOnR1s74o

Krokodil is a new devastating drug of choice literally eating users from the inside out-rotting their brains and limbs before their eventual painful death.  Russia’s hidden epidemic began around four years ago when heroin addicts discovered a cheaper alternative using a mixture of petrol, codeine pills and eye drops-a deadly combo costing two pounds a pop!  Russia has the most heroin users than any other country in the world but thousands have been turning to the homemade substance and a detailed article by The Independent reported that there are 100,000 users of the cheaper alternative-which has less of a hit and if you thought the effects of heroin were horrendous then watch any clips you may find with precaution.  Withdrawals last for a month and if you miss a vein the flesh literally rots away-one of the Youtube videos I found showed footage of a man whose calf bone was left fully exposed.
This is an absolutely shocking account which will no doubt horrify but compel viewers in equal measure.
http://edition.cnn.com/2011/11/04/world/asia/vice-siberia-krokodil-tears/

THE FUTURE OF BUSINESS THROUGH YOUR MOBILE? (Adrian)

This new mobile phone prototype could very well represent the tool of the future for workers on the go. It’s such a simple yet brilliant concept that I can’t believe no-one’s developed it yet, but this funky gadget will project your smartphone desktop onto the nearest surface – and let you control all of the icons while you’re speaking to someone through the phone. If they can downsize the prototype down from the slightly clunky attachment it currently looks like down to a slinky, micro-sized add-on, it could be the must-have gadget for 2012’s office worker.
http://www.geeky-gadgets.com/pico-projector-equipped-iphone-can-be-used-for-interactive-phone-calls-video-14-11-2011/#more-97308

Ever seen someone balance a stack of coins-that’s 3,118 to be precise-on a single dime?  Neither had I until now so without further ado enter Tai Star-not sure if that’s his real name, sounds a bit Hipster-esque but who cares!  It took 7 hours to build this record-setting masterpiece which rests ambitiously on the corner of a desk but apparently this is the sturdiest part.
Impressive stuff, if only I still had that jar of shrapnel.
http://www.neatorama.com/2011/11/12/stacking-3118-coins-on-a-single-dime/