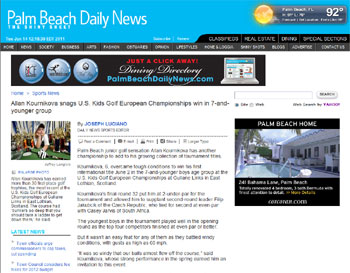 A young American’s stunning victory at the recent U.S. Kids Golf European Championship has been highlighted in a leading Florida newspaper.

The Palm Beach Daily News reported on how Allan Kournikova had triumphed in the boys 7 and under section at the competition – becoming the youngest champion in during the three days of tournament play in Scotland.

The Florida-based youngster, who is the brother of tennis star Anna Kournikova, shot a 2-under total for the competition and has qualified for the prestigious U.S. Kids Golf World Championship later this summer. He was one of around 500 players from around the world who competed on traditional Scottish links courses during the European Championship.

The full coverage can be viewed on the Palm Beach Daily News website and was the result of a sustained public relations campaign carried out by Holyrood PR PR in Scotland.