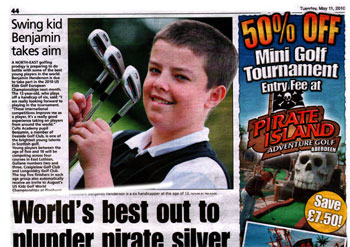 Organisers of the U.S. Kids Golf European Championship have been celebrating after winning new coverage in the Scottish regional press.

The tournament, which is one of the highlights of the junior golf calendar, received a glowing write up in the Aberdeen Evening Express news pages during a story about a young competitor from the area.

The newspaper reported on how Benjamin Henderson from Aberdeen was hoping for glory at this year’s championship. He will join around 500 kids from across the globe, who will all be competing for the European Championship prize.

The full coverage appeared in the Evening Express and was the result of a PR in Scotland campaign by the Holyrood PR.