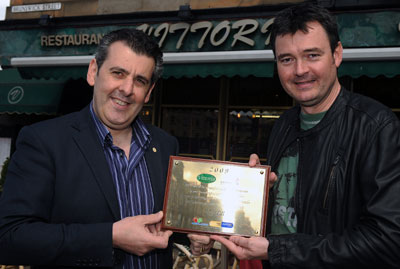 An award winning Italian restaurant group has had its outstanding fundraising efforts for Forth One and Forth2’s Cash for Kids appeal officially recognised.

Edinburgh restaurants Vittoria, Vittoria on the Bridge and La Favorita raised a total of £7388 in 2009 through its innovative Kids Eat For £1 deal.

Under the scheme, each restaurant offers a full £5.50 child’s meal for kids under 12 eating with an adult for a £1 – with all of the money donated to the Edinburgh-based charityTo mark the achievement, Radio Forth DJ Grant Stott presented owner Tony Crolla with a plaque to recognise the contributions made by the restaurants.

Grant said: “Having known Tony for a number of years and eaten in all three of his restaurants on many occasions, I was delighted when I heard he was using this promotion to raise funds for Forth’s Cash for Kids.

“The amount already raised is staggering – more than £7000 and rising – and testament to the successful business he runs here in Edinburgh.

“Also, his pizzas are blimmin’ marvelous!”

Tony said the Kids Eat For £1 initiative is to continue throughout 2010 with hopefully an even bigger sum being secured for the charity, which provides grants for disabled and disadvantaged children in Edinburgh, the Lothians and Fife.

He added: “We are really pleased with the fantastic amount of money we raised in 2009, particularly as we only started in the April – that’s got us determined to see if we can beat that figure this year.

“We’ve had thousands of families taking up on the offer, and although this has represented a major commitment for us and our three restaurants, we know this is such a worthy cause.

“We hope that new families – as well as those that have enjoyed it before – will come and take advantage of this offer.”

Press release issued on behalf of Vittoria as part of a successul PR and social media campaign carried out by the Holyrood PR.