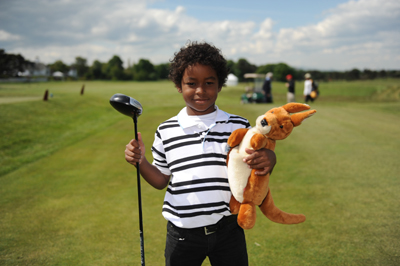 The cream of the world’s young golfing crop found plenty to celebrate in the 2012 U.S. Kids Golf European Championship – which has been hailed as the best ever.

The event returned bigger than ever before, with more 550 competitors from 50+ countries – and the event itself had everything golfing enthusiasts could wish for; holes-in-one, amazing birdie runs, runaway victories, dramatic final-round turnarounds and tenacious returning champs retaining their titles.

Alasdair Good, tournament co-ordinator and head PGA professional at Gullane Golf Club, said: “The level of play has superseded even our highest expectations – there have been more than a few breath-taking moments.

“With more competitors from a wider range of countries than ever taking part, we have been privileged in watching some, of what I have no doubt will become, the golfing stars of tomorrow.

“I also have no qualms in saying that this year’s competition has been the best yet. Not only do the venues feel completely comfortable with the event set up, but both competitors and their parents have come to terms with the overall ethos.

“I feel we have reached the stage where everyone, from organisers to entrants, knows the ethos of the tournament and can fully enjoy the whole experience. It was always our aim that this event be more than just a competition, and this year it seemed like the celebration of family oriented golf that it was designed to be.”

After the final round of the tournament, competitors from 11 countries – Mexico, Bangkok, France, England, Australia, the Isle of Man, Denmark, Singapore, Austria, Spain and the US – who topped their categories went competed in the Van Horn Cup. The event, formulated in the same way as the Ryder Cup, saw the European entrants beat their International counterparts for the fifth year in a row, winning 8-5.

The championships – played over five of Scotland’s most famous golf courses; Gullane No. 2, Gullane No. 3, Craigielaw Golf Club, Luffness New Golf Club and Longniddry Golf Club – is organised by the U.S. Kids Golf Foundation, which aims to promote the game of golf to young players and their families around the world.

In addition to picking up the individual European Championship trophies, each age group winner also won a place to the prestigious U.S. World Championship, which is being held at Pinehurst, North Carolina, later this summer.

Adding a showbiz buzz to the event was returning champion Allan Kournikova, younger brother of leading female tennis player Anna Kournikova. Allan held off a strong Boys 7 & Under field to claim his second consecutive European Championship title at 7-under-par 101. Alan posted a final-round 1-under-par 35 to claim a three-stroke victory, and over the week he posted nine birdies and an eagle.

Another victory for the Brits occurred when Aadam Syed of Hayes won by an impressive nine strokes in the boys 11 division, edging out Reece Els of South Africa, nephew of world famous golfer Ernie Els, in the process. Aadam, who provided himself with an enormous cushion with seven straight birdies in his opening round, finished at even-par 216 for the tournament.

Without doubt the most remarkable victory of the tournament was in the girls age 11 group where Isabella Fierro of Mexico improved each day to secure herself a 20-stroke victory.

Elsewhere, two young British golfers also achieved what most professionals can only wish for by scoring a hole in one.

Benjamin Schmidt from Barnsley hit a 27 degree rescue club down the left side of the 15th at Gullane No.3 on day one of the tournament, and Shergo Kurdi from Surrey aced a pitching wedge at the 4th at Longniddry, the ball bouncing once on the green before going straight into the hole.

The U.S. Kids Golf Foundation was launched in 2001 to provide opportunities for kids to play and learn the game through local tours and tournaments.

Since holding its first tournament in 2000, the U.S. Kids Golf Foundation now runs some 600 events each year including the prestigious World Championships – the largest and most prestigious golf tournament for kids in the world that attracts more than 1,200 players.

Chris Vonderkall of U.S. Kids Golf said: “The 2012 European Championship held the largest field in the event’s five year history. It was highlighted by an excellent mix of families from around the globe interacting on and off the golf course.

“Thankfully, the weather cooperated beautifully all week and there was no stoppage of play during the four days of competition.

“On the course, the level of play was fantastic. Two holes-in-one highlighted the play, in addition to a player recording seven consecutive birdies and another recording a 20-stroke victory.

“We are all looking forward to returning to East Lothian next year.”

A full list of all scores is available on this link: http://www.juniorgolfresults.com/public/index.cfm?event_id=123