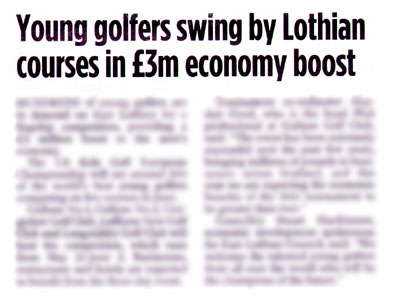 The U.S Kids Golf European Championship is set to drive a boost to the country’s economy and tourism sector. Businesses, restaurants and hotels across East Lothian and throughout Scotland are predicted to benefit from the three day event, which will see 500 of the world’s best young golfers competing in East Lothian in June.

The championship is expected to bring in revenue with the arrival of competitors and through a forecasted knock-on effect with the arrival of their accompanying family members.  Possibilities for economic growth may also be seen long term as some families may stay for longer than the three days, plan return trips and visit other parts of Scotland once the competition has finished.

Building on the previous economic success of the Championship, this year is set to raise the putt even higher.  The competition has been embraced by tourism and economic chiefs in Scotland, who have stressed the importance of the event to the country’s economy.  Councillor Stuart Mackinnon, economic development spokesman for East Lothian Council said: “I hope our visitors, when they aren’t playing or watching golf, can also take time to enjoy the many other attractions that the county has to offer.”

More information about the U.S Kids European Championship can be found on their website and the article in the Evening News was secured as part of a public relations campaign carried out by the Holyrood PR.