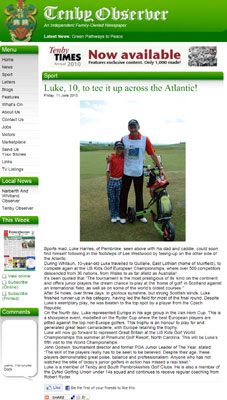 Local newspaper the Tenby Observer has featured an  article on a winning young golfer who has won the chance to play golf in America after attending this years US Kids Golf European Championship.

Luke Harris from Pembrokshire travelled to Scotland to take part in tournament which saw over 500 young golf players from over 30 nations comepete across some of the countries most historic golf courses.

The article quotes: “The tournament is the most prestigious of its kind on the continent and offers junior golf players the dream chance to play at the home of golf Scotland against an international field and on some of the Worlds oldest courses.”

Despite leading his category over most of the events 54 holes, Luke came runner up in his category after 3 days of exemplory play.

He then went on to represent Europe in his age category in the Van Horn cup – a showpiece event based on the Ryder Cup that saw European and Non-European players pit it out for the coveted Van Horn Cup.

Tournament director John Godwin quotes in the article: “The skill of the players really has to be seen to be believed.  Despite their age these players demonstrated great poise, balance and professionalism.  Anyone who has not watched the elite of todays junior golfers has missed out on a treat.”

Luke will now go on to represent Great Britain in this years US Kids Golf World Championships – his 5th year in attendance – which will take place at the Pinehurst golf club North Carolina.

The full article can be found online and was secured as part of a successful PR and social media campaign carried out by the Holyrood PR.