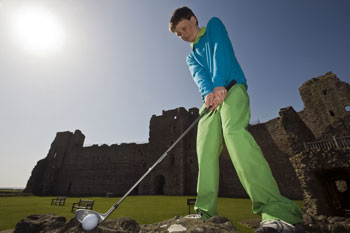 A tournament featuring some of the world’s best young golfers is expected to bring a seven figure economic boost to the Scottish economy.

Hundreds of youngsters and their families from across the globe will arrive in East Lothian at the end of the month for the U.S. Kids Golf European Championship – a three-day event that will showcase the best emerging talent in junior golf.

Businesses, restaurants and hotels across East Lothian and the rest of Scotland are expected to benefit hugely from the tournament, which will see around 500 youngsters aged between 6-18 competing for the title of European Champion.

The majority of competitors – who are travelling from as far afield as Australia, Venezuela, India, Columbia and Egypt, as well as United States and from all over the UK – are likely to bring many of their family members to the tournament, which is expected to have a knock-on effect on the local economy. Overall, the event is expected to bring economic benefits of around $4,000,000 (£2.72 million) to Scotland.

Tournament co-ordinator Alasdair Good, who is the head PGA professional at Gullane Golf Club, said: “The U.S. Kids Golf European Championship brings huge economic benefits to the local economy and the rest of Scotland. Over the past couple of years, the event has brought millions of pounds to businesses across the country and we’re expecting the 2010 tournament to be equally successful.

“Some of of our young players are coming from as far afield as Australia, South America and India for the tournament, and they will each be bringing between two and four family members to Scotland with them. It’s a big trip for players to make, so it becomes a family holiday for them – and while they compete in the tournament, some of their family will go and explore the surrounding area.

“In past years, we have found that many players and their families choose to stay in East Lothian but others will find accommodation in Edinburgh or elsewhere in the Lothians. They visited local restaurants and shops and their families explored tourist attractions across Scotland while the children were playing golf. It’s a massive direct boost for the national economy and we expect this year’s event to be just as beneficial.”

The tournament has already been welcomed by tourism and economic figures across Scotland, who highlighted it as a key event in the country’s golfing calendar.

Mark McCardie, VisitScotland golf product manager said: “This is a fantastic opportunity to highlight golf in East Lothian and Scotland to a huge audience of young golfers but also to family and relatives who will be joining the youngsters during their stay. The massive global reach the competition affords Scotland is crucial to the ongoing drive to cement Scotland’s status as a world class golfing destination.

“Showcasing some of the very best courses in East Lothian during the championship will undoubtedly see kids returning for many years to come, meaning that initial economic impact is fantastic but the legacy created will contribute significantly to the sustainability of the golf industry and tourism overall.

“I wish everyone taking part the best of luck and above all else I hope there is plenty of fun and the kids enjoy some perfect golf.”

Councillor Stuart MacKinnon, economic development spokesman for East Lothian Council added: “We are delighted to play host to the U.S. Kids Golf European Championship again this year and to welcome the cream of young golfers from all over the world. We have a knowledgeable golfing audience here who are always impressed, and not a little envious, at the great skill the young people display.

PR in Scotland for kids golf

“The game has been played in the county for centuries and continues to be an important part of our sporting culture and tourist economy. East Lothian’s 22 courses, each with its own challenge and historical standing, offers our guests a golfing experience probably without equal anywhere.”

The top finishers in each category will then compete in the Van Horn Cup over Gullane No 1 – a showpiece event, modelled on the Ryder Cup, where the best European players are pitted against the top non-Europe golfers.  The top five finishers in each age and gender group will automatically receive an invitation to the U.S. Kids Golf World Championships at Pinehurst Golf Club, North Carolina, in August.

This year’s competition has been expanded to allow 15 to 18-year-olds to compete for the first time, and it is hoped that this will encourage even more entries from budding junior golfers across the globe.