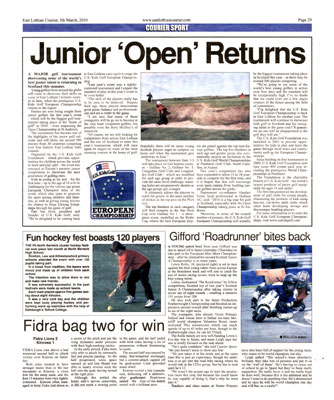 A junior equivalent of The Open Championship being staged this summer in Scotland has won new headlines in the East Lothian press.

The East Lothian Courier ran a full page article about how the U.S. Kids Golf European Championship was returning to the region in June, bringing hundreds of the world’s best young golfers to battle it out on the links.

The tournament will see some of the best young talent from around the globe playing on four historic courses in East Lothian this summer. Kids aged between 5 and 18 will participate in differing age groups before the winners face off in the Van Horn Cup – a special one day tournament based on the Ryder Cup.

The full article appeared in the East Lothian Courier and was the result of a sustained PR in Scotland campaign by the Holyrood PR.