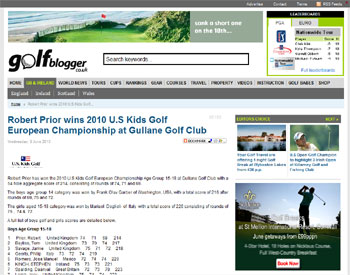 The influential website Golf Blogger reported on the results of the 2010 tournament, which saw hundreds of the world’s best players competing on the links in East Lothian.

The website ran a full list of results for every age category at the tournament, which saw kids as young as six competing for the European Championship prizes. It added that the annual event – now in its third year – had been a triumphant success.

The full coverage can be seen on the Golf Blogger website and was the result of a PR in Scotland strategy implemented by Holyrood PR public relations in Edinburgh.