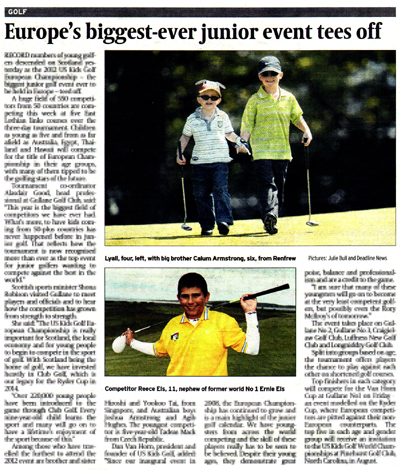 The largest junior golf tournament in Europe being held by U.S. Kids Golf in Scotland has caught the attention of Scottish Sports Minister Shona Robison, who visited the young golfers and officials.

Shona said: “The US Kids Golf European Championship is really important for Scotland, the local economy and for young people to begin to compete in the sport of golf. With Scotland being the home of golf, we have invested heavily in Club Golf, which is our legacy for the Rider Cup in 2012.”

The championship has done nothing but strengthen Scotland’s image and economy, as well as over 500 young golfer’s love for the sport. Children as young as five are competing, but despite their young ages, they are reported to demonstrate great poise, balance and professionalism.

This coverage can be viewed in full on the Scotsman Online website and was achieved as part of the ongoing PR campaign by the Holyrood PR on behalf of U.S. Kids Golf.

Comments Off on Alternative Solutions for Relationship Disputes

How will coronavirus impact childcare arrangements?

Comments Off on How will coronavirus impact childcare arrangements?

Comments Off on Alternative Solutions for Relationship Disputes

How will coronavirus impact childcare arrangements?

Comments Off on How will coronavirus impact childcare arrangements?