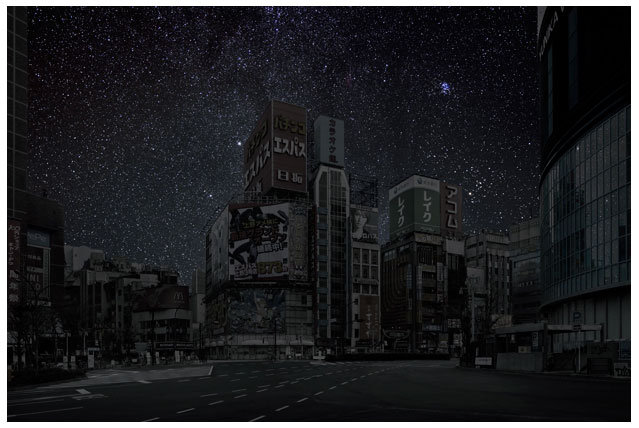 Fill your buckets and your boots with our social media outbursts on Facebook, Twitter, Linkedin and Google +.

I have a bit of a fascination with the night sky and find it incredibly frustrating that we don’t get the best view of the constellations in Edinburgh due to light pollution.
Some of the best stars I have ever seen have been on the west coast of Scotland and in rural mid Wales but devoid of huge populations, the vast majority of us don’t get to enjoy these.
Imagine if the world’s cities had the electricity plug pulled for one night and the skies were lit up by the wonders of our galaxy?
Well French photographer Thierry Cohen has produced a series of images which illustrate just that.
Although it looks slightly apocolyptic, it is pretty amazing to see what some of the world’s brightest cities look like when the lights are off and the stars come out to play.
http://thierrycohen.com/pages/work/starlights.html

Did you know that goats have accents? Did you know moths have a taste for chardonnay? Or did you know bees have different personalities and some are thrill-seekers?
This time last year you definately didn’t and these are just three random, but very interesting, facts from the BBC’s list of the top 100.
Some absolute chestnuts in this lot, mostly involving animals.
http://www.bbc.co.uk/blogs/magazinemonitor/2012/12/100_things_we_didnt_know_last_7.shtml

For those of you who managed to miss the detailed ins and outs of the Leveson inquiry, and lets be honest it was often hard to filter the amusing from the dirge, the Huffington Post has created a handy article outlining the  essentials. From who called who Daddy to who rode which horse which formerly belonged to someone else, etc. It also gives a bit of fluff relating to the celebrity and political personalities involved, and often who they clashed with. Another good one for around the festive table when that always-right family members is mouthing off.
http://www.huffingtonpost.co.uk/2012/11/27/leveson-inquiry-texts-horse_n_2198358.html?utm_hp_ref=uk​

13 TRENDS TO THEIR DEATH (Aimee)

Every year brings in some trends which seemed a crackin’ idea at the time only for a few months later to be considered proper naff – especially when everyone is doing it.
Huffington Post has gathered 13 of the best and I’ve got to say I agree with all of them apart from the patterned trousers, those bad boys can stay.
Side head shavers – be off with your heads once they are again fully restored in hair.
http://huff.to/VFZb9C

If you were paying attention to any form of social media this year you would’ve noticed a few brand’s marketing plans going down the toilet. Google, McDonalds and Yahoo all had their moments in the spotlight mostly for the wrong reasons. Whilst Google got caught spying with street view, Asda was defending its decision to use a woman in its Christmas ad. Can they ever get anything right?
http://www.brandrepublic.com/news/1163470/top-10-marketing-mishaps-2012/