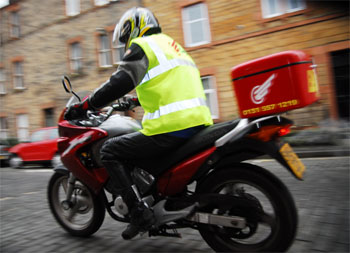 Scotland’s leading independent courier firm has honoured a unique charity pledge in Renfrewshire – by making a special donation to a local scout troupe.

Eagle Couriers has made the donation to the 1st/3rd Johnstone Scout Group, which was chosen as the recipient of one of its “special deliveries”.

Under the charity scheme, which was launched at the end of 2008, community groups and small charities across Paisley and Renfrewshire were encouraged to apply to Eagle Couriers and explain what gift they would need to improve their work in their local area.

And now, after receiving requests from community groups across the region, the firm has decided to lend its support to the scouts – who are undertaking a major refurbishment project on their headquarters on Campbell Street in Johnstone.

The scout group’s “special delivery” will see Eagle Couriers donate £100 towards the redecorating costs of the scout hall, which is in need of refurbishment and redecoration.

The firm is hoping that its gesture sparks other companies to make similar donations to the scout troupe and allow them to complete their project.

Jerry Stewart, one of Eagle Couriers’ directors, said: “We had a lot of requests from community groups, projects and charities across Paisley and Renfrewshire. Many were asking for funding and equipment to help with their work, and we could have chosen any one of them.

“However, when we saw what the Johnstone scouts were undertaking, we really wanted to help them with their plan. The group has only just reformed after a two year hiatus and is completely overhauling its headquarters in order to provide a safe, secure environment for future generations of young scouts.

“We have provided them with help to buy the paint and decorating tools they need, but they also require other equipment that is very expensive – such as new security shutters, fire doors and a brand new kitchen. Although we have given them a helping hand, I’m sure they would be delighted to have even more support from other local businesses to make their vision come true.”

Eagle Couriers employs 100 people between Edinburgh and Glasgow and regularly delivers medical equipment and sensitive data across the Lothians for clients including the NHS, BT and the Scottish Government.