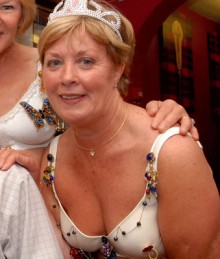 A novel use of gems was employed to help raise funds for cancer charities, when three sparkling women completed Edinburgh’s moonwalk in their bespoke bejewelled bras.

The girls proudly wore their exclusive gem-studded bras when they walked to raise money for cancer charities, along with thousands of women in Edinburgh on the night of Saturday June 16.

The bras were adorned with an assortment of gems and precious stones specially selected by Alistir for the project.

Alistir said: “I was just delighted to help Annette, Ulla and Anne by creating the bras, which was a fun and unusual way to support their efforts for an important cause.”

Alistir further pledged his support with a generous donation to Walk the Walk, the charity organising the event.

Alistir enjoys good relations with the customers in his successful Rose Street shop, and has been known to show regular support to charities during his 25 years in business.

The Moonwalk Edinburgh 2007 saw 10,000 women walk by night in their bras to raise money for breast cancer research and cancer care.

The event has now been running on an international level for 10 years, and has raised in excess of £20 million to date. For further information visit http://www.walkthewalk.org/