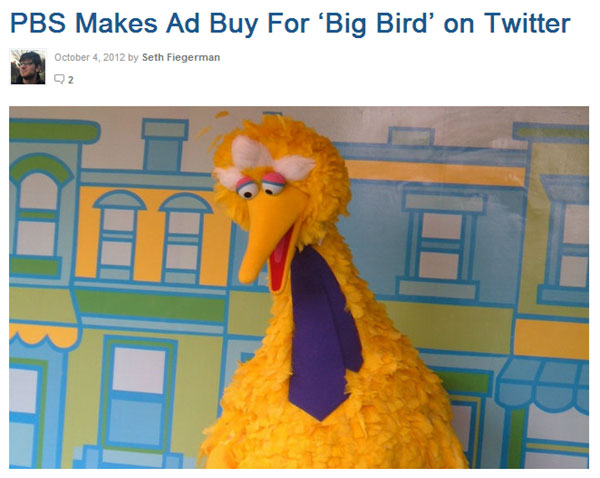 For all of you big bird banner-wavers out there, and for all old-school Sesame Street scenesters, Big Bird has taken to twitter after his big yellow feathers were ruffled by a Republican (and who can blame him, they are a notoriously pesky breed of bird botherer). The social media involvement by the iconic children’s TV show character came about after Mitt Romney, US Republican Presidential candidate, declared his love for the fluorescently feathered giant during the presidential debate last night. However his amour was slightly undermined by the fact he maintained his commitment to withdraw government funding from PBS, the television network that airs Sesame Street. The reaction across social media was fast and defensive, with twitter accounts and photoshopped pics highlighting the public’s support for this institutional TV legend.
http://mashable.com/2012/10/04/big-bird-twitter/

Beasts of the Southern Wild is a film that depicts the lives of a man and his young daughter, Hushpuppy, trying to survive in the swamps of the deep south. Whilst the film is still to reach the UK (in cinemas on 19 October) it has caused a ruckus in the cinematic world with murmurings that eight year old Quvenzhané Wallis should receive a Best Actress Oscar for her portrayal of Hushpuppy. However, this poses the question: is eight years old too young to receive an Oscar, especially when it is your first major film role? Having watched the trailer I would say no, as Wallis’s performance is captivating. I can’t wait to go see the full film in the cinema!
http://www.huffingtonpost.co.uk/2012/10/01/exclusive-featurette-beasts-southern-wild-quvenzhane-wallis_n_1928629.html?utm_hp_ref=uk​

This is probably the most random but equally interesting story I’ve read in a while. A couple of mute swans recent split could potentially break a two hundred year old tradition at a palace in Somerset. Bertie and Vicky, just two of the swans that have been carrying the tradition of ringing bells at Bishop’s Palace in Welles to ask for bread, have split up. Bertie has flown the coup leaving the palace in silence with no bells ringing. Let’s hope Bertie gets home soon as Vicky will be seriously hungry!
http://www.telegraph.co.uk/earth/wildlife/9588006/Swan-love-split-threatens-200-year-old-bell-ringing-tradition.html

Cider brand Strongbow claims to have invented the world’s first digital bottle top with their new ‘StartCap’ installations, where opening bottles of the beverage triggers ‘unexpected things’.
It is powered by Radio-frequency identification (RFID) with the bottle tops connecting when opened with the signal in participating venues which will translate into various actions such as turning on projections, shooting confetti, launching fireworks and checking you in on Facebook.
So far events have been staged in Budapest and Rome to launch the StartCap – will be interesting to see when this hits the UK!
http://www.youtube.com/watch?v=Kp6JJKbOSeY&feature=player_embedded
http://www.start-cap.com/​

GET HER DIGITS (Aimee)

This one is for all the fellas out there getting their lines ready for what could be a full of weekend of fails! This trio have a full catalogue of videos on Youtube showing how to successfully pick-up some panty action in disguises which would stereotypically ward off any ladies!
WWE Smackdown doesn’t immediately bring to mind images of chicks willingly giving up their digits but you would be surprised!
Guys, do you smell what The Rock is cookin?
http://www.youtube.com/watch?v=muT-9YPDZsI&list=SPC4EA12B1DE96F05E&index=5&feature=plpp_video