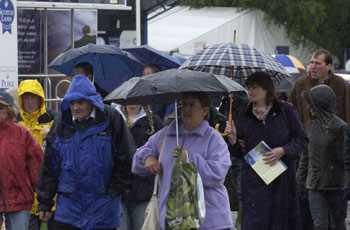 It’s sod’s law that, when you’ve spent weeks planning and preparing an outdoor event, it’s going to pour down with rain on the day itself.

So it should perhaps come as no surprise that our latest photocall for the U.S. Kids Golf European Championship ended up being, well, a bit soaked.

Half of the Holyrood PR team were out today in Gullane for a special golf try-out day, intended to give East Lothian school kids some golf tuition and help promote the forthcoming European Championship. The stage was set for a glorious afternoon of sunshine and fun, which would give our photographer and videographer some great visuals to use in our PR push for the event.

That is, until the rain started to pour down.

Of course, we’ve faced similar challenges in the past. We’ve countered the snow and ice to stage a photocall for Children 1st’s Safeguarding in Sport launch at Meadowbank Stadium before – and sheltered from torrential rain in Glasgow during a photo event with terror attack hero John Smeaton. Even the U.S. Kids Golf tournament has caused injury in the past, as I returned to the office lobster red after sustaining a pretty vicious sunburn in 2009.

But it’s still annoying when your best laid plans are scuppered by the unpredictable Scottish weather. Thankfully the deluge this time was just a passing phase that only caused a slight delay to the photos and didn’t leave our young participants too wet – but it would have been nice to have had the sunshine for the whole day. As it was, the clouds only properly parted when we were packing up and heading back for Edinburgh. Typical.

I guess that’s just the breaks of being in PR. Sometimes you just have to roll with the punches and keep a smile on your face, whatever the weather.