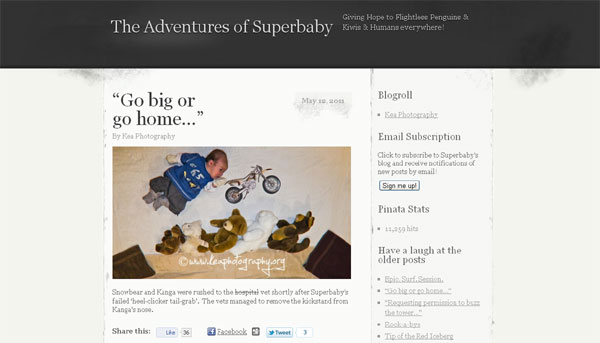 Think you have what it takes to take on our links in the super stakes – then tell us and we can arrange a super link face off! We welcome all comments on our Facebook and Twitter pages and look forward to reading them – once we’ve finished saving the world of course!

Whilst uploading this week’s Quiet News Day podcast my eye was caught by this unbelievably cute blog by New Zealand photography company Kea Photography. Titled The Adventures Of Super Baby, the blog is based around a series of images featuring a baby (its not clear whose baby it is but I am assuming one of the photographers) in a variety of comical adventure poses. From surfing, the flying to daring motorbike stunts – you name it this kid has posed for it. But fear not the baby never has to leave the comfort of his cot as the creative scenes are constructed around him/her using origami towels. The baby also has its own facebook page and whilst it may only have 217 followers the level of interaction suggests that those who follow are pretty dedicated. It’s a fantastic way for the photography company to display their creative side, provide links to their website as well as creating a buzz about the work that they do…..take a look at some of Baby’s adventures here.

The Adventures of Superbaby

No matter what gloss parents later put on it, the sleep deprivation brought on by looking after young children can be a soul-sapping, career-damaging, marriage-wrecking horror show. So most who’ve been through the experience will crack a wry smile at this sweary book – ostensibly a night-time read to help junior nod off – entitled Go The F**k to Sleep. It’s NSFW and almost certainly isn’t intended to be read out loud to your precious little bundle. Check out the comments on this link to see just what a divisive subject this can be.

ATTACK OF THE KILLER WATERMELONS (Pamela)

Farmers in China had to run for cover yesterday after their crop of watermelons  began to spontaneously combust.  On investigation the famers admitted to using chemicals to quicken the growth process.  They thought it was just a matter of bad timing when administering the hormone, however they found that untreated fruit had exploded too, leaving scientists baffled.

While fast food burger outlets are certainly popular in the UK, we thankfully don’t have quite the same voracious love affair as Americans do for quarter pounders with cheese. However, despite their cultural empathy for the humble hamburger, even the biggest fast food-loving Yanks would probably be appalled by their fellow countryman Don Gorske – who has just eaten his 25,000th Big Mac.The burger aficionado appeared in the 2004 film Super Size Me and has set the world record for most hamburgers ever eaten by one person. You’ve got to love the medical verdict about his gluttony as well, with doctors quoted that they “do not recommend Mr Gorske’s diet”.  Brilliant.

The most talked about fashion outing at the Royal Wedding after the bridal dress and Pippa’s derriere hugging dress, was the rather unfortunate fashion faux pas made by Princess Beatrice when she decided to wear a pretzel shaped hat. Never one to be known for being fashionable, poor Beatrice smiled on throughout the celebrations, whilst the nation was stunned by her choice of headwear. Well know it seems Beatrice is having the last laugh after putting the hat up for auction on ebay in order to raise money for charity, after becoming aware of the interest in received online via twitter. So far bids stand at over £18,000 for the Phillip Treacy design and it is estimated that the Princess will raise £20,000 for her charity the Little Bee Initiative which helps support children in crisis.